STA is All About That Bass 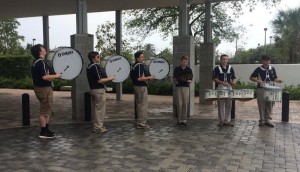 It’s a Friday night in the fall, the sights and sounds of football are in the air. As game time nears, you can hear the beating drums and blaring horns in the distance. When the marching band comes into sight, something new catches your eye: ErgoSonic bass drums. The Marching Raiders drumline is the first in Florida to be setting the beat with these innovative drums.

For years, the world of the marching arts has seen one type of marching bass drum. ErgoSonic, a small, emerging company based in 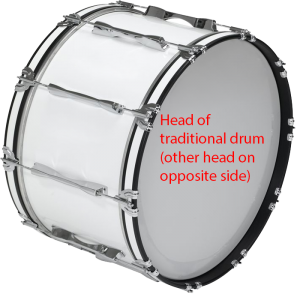 Apalachin, New York, has invented a different type of marching bass drum that allows greater freedom of movement for bass drummers and improves the overall sound at the same time. Traditional bass drums have two resonant heads on either side of the drum that project the sound to the sides. This usually means that the drummers have to turn towards the crowd so their drums are heard. The ErgoSonic drum alleviates this problem. Because of their unique design, the drummer plays on one drum head instead of two. This allows for a cleaner tone quality overall and gives the drummer better playing control.

In a recent phone interview with Anthony Montalto of Raider Review, Mr. Ken Turner, President of ErgoSonic Percussion, said that during his career as a band director and a competition judge, he noticed

many problems with the traditional bass drums, including some safety issues. So he then decided to come up with his own design. “I literally took a hacksaw to some old bass drums,” said Mr. Turner. He put together his prototype about five years ago. According to Mr. Turner, St. Thomas Aquinas (STA) is one of 33 schools in the entire country to have this product, and the first in Florida.

The ErgoSonic drums are also smaller than the traditional bass drums. However, because of the different, angled-shell design, they sound bigger, and can be tuned in a variety of different pitches, according to ergosonicpercussion.com.

Mr. Bradford said that there are many musical advantages to the design of the ErgoSonic drum, and he believes that they will help the drumline in the future. He also said, “As a person who played bass drum in high school and college, I wonder why people didn’t come up with them before.”

So next year at game time when you hear the drumline playing Bell Song, or another cadence, look over and check out yet another thing unique to STA!