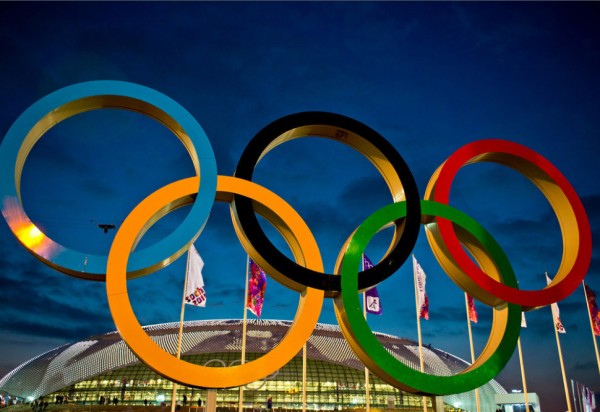 Getting Ready For Rio 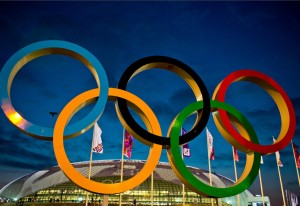 The Olympics’ emblem representing the five continents of the world. Photo By: Atos

This summer, around the world, people will be gathering to watch the long-anticipated 2016 Olympic Games. Although many supporters are excited about the games in Rio, there has been controversy over whether Brazil will be a good host for the events. For the past few years, Brazil’s poor economic situation has raised concerns about whether the country is ready to take on a large financial responsibility such as the Olympic Games. Sevenpillarsinstitue.org explains that there are several contentious issues surrounding the extensive number of infrastructure projects that Rio needs to complete prior to the start of the competitions. To compound the matter, the recent outbreak of the Zika virus has caused an uneasiness among fans planning to attend the games.  Despite these ongoing problems, the Olympic Games are expected to be very exciting. 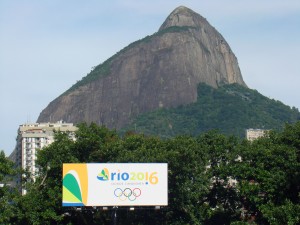 A banner in Rio advertising the 2016 Olympics. Photo By: Rodrigo Soldon

This year, the Olympic Games will be held from August 5 to August 21. There will be 42 sporting events, including archery, track and field, basketball, volleyball, diving, football (soccer), swimming, tennis, and water polo. Athletes and competitors from more than 200 countries are expected to participate in the 2016 Olympic Games. Rio2016.com states that athletes will participate in over 300 events, for which 136 medals are reserved for women, 161 for men, and nine medals for mixed competitions. The events will take place across the country at more than 30 venues, including an additional five football (soccer) co-host cities: Manaus, Belo Horizonte, Brasilia, São Paulo and Salvador. 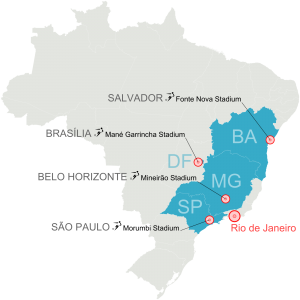 Map displaying the venues where the events will be played. Source: Felipe Menegaz

According to olympic.org, the games originated in ancient Greece in 776 B.C. and consisted of contests dedicated to the Olympian gods as a way to demonstrate the physical qualities of the evolving human race. In A.D. 390, Roman Emperor Theodosius discontinued the games. In April 1886, French educator and historian, Baron de Coubertin, founded the International Olympic Committee and revived the games. The new Olympic games offered a broader selection of competitions and were open to nations around the world.

Despite the obstacles surrounding this year’s games, they are still expected to proceed as planned.  So, let the games begin!