Under the Sea in the Classroom 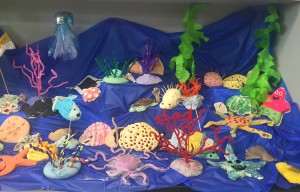 Mrs. Diane Enten, a science teacher at St. Thomas Aquinas (STA), found an interesting way to teach her freshman biology class about Florida’s coral reef system. Mrs. Enten decided to create her own coral reef biome with her students. She said, “While videos are good, it is impossible to get a true picture of a coral reef up close.¨ Mrs. Enten realized that a field trip to a coral reef was impractical, so she decided to bring the coral reef to her classroom.  She said, ¨We were speaking in class and students had shared snorkeling and diving adventures, so we decided to create our own reef.” 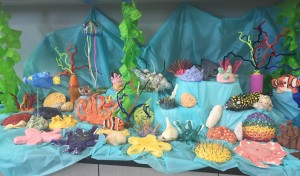 Completing the project took a significant amount of time and effort. According to Mrs. Enten, “Students had to research ‘Florida coral reefs’ and decide which organism they would make.  We shared among the classes to get a good mix for our reef.  I made 100-150 lbs of salt dough, and the students created their pieces using food coloring to dye the dough, paint, pipe cleaners, toothpicks, etc.  The students then have to create and present a PowerPoint about their organism, its habitat, symbiotic relationships, community, niche and other ecological factors since we are studying ecological communities.“ Mrs. Enten also made sure that all of her students were involved.

The students really enjoyed the opportunity to create this unique project. Clayton Zinkle said that, “… none of the other projects were really this creative.” He said, “[Mrs.Enten] made a salt dough, and we all brought in flour for it and spent an entire class period making an organism that we researched.” All the students pitched in to create a coral reef that was ultimately ten feet long!

The project took a week and a half to complete, and the final result was impressive. Mrs. Enten said, “ We have represented in the biome: crabs, fish, coral, eels, sea anemones, sea urchins, star fish, jelly fish and more!”

Mrs. Enten acknowledged that her students put a lot of work into creating this project. The assignment proved to be a fun way for students to learn more about ecological communities. This is another example of the many creative methods STA’s teachers use to help students excel in their studies.