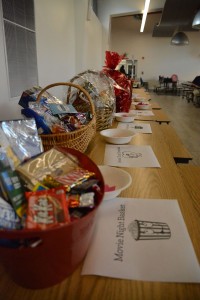 Baskets made by the Campus Ministry students

On November 1, Saint Thomas Aquinas (STA) held the second-annual Rich Man Poor Man dinner in the cafeteria from 5:00 to 7:00 PM. STA partnered with Misión Manos a Manos, a missionary group that focuses on helping the poor who live on the outskirts of Lima, Peru. The proceeds from the ticket sales benefited Misión, and the event brought greater awareness to their cause. A few Misión representatives sold a variety of products, such as bracelets and figurines, in order to raise additional money. Students from Campus Ministry had also assembled baskets to raffle off as another way to contribute to the fundraiser. Each basket had a different theme, such as movie night and spa baskets, which included a variety of products that corresponded with each theme. The money raised at this event will benefit young people from the outskirts of Lima by providing scholarships for college or trade schools. The Rich Man Poor Man dinner was open to all STA students for the very affordable price of five dollars.

This type of event is meant to illustrate the large discrepancy between the rich and poor throughout the world. In the words of Dr. Robertson who worked with the Campus Ministry students, “Rich Man Poor Man is a different kind of a dinner. You buy a ticket and commit to eating whatever dinner is provided. It’s based on the percentages of rich, poor, and middle class people in the world. If roughly four percent of the world is ‘rich’, then four percent of the tickets sold will get a dinner, which is cooked by a nationally renowned chef. They will be served a wonderful four-course meal at a separate table. The next approximate ten to twenty percent will represent the middle class of the world. They will get a dinner of some chicken, rice, and water to drink. The majority, representing the poor in the world, will simply get a bowl of rice and a cup of water. They will all eat their meals at the same time in the same room to kind of get an idea of what goes on in the world when it comes to food for the poor.”

The main student coordinator of the event, Senior Alley Masoco, said, “It meant a lot to know that I was able to help somebody by being in charge of this event. With my busy life, it allowed me the time to slow down and think about others who are less fortunate. It is important for STA to hold this event because, generally speaking, we’re upper middle class students. We don’t understand the importance of education all the time. We take it for granted. This meal gives people a chance to step into the shoes of somebody who’s less fortunate.” 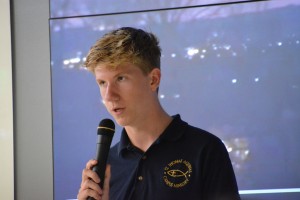 Sophomore Victoria San Juan, a member of Campus Ministry said, “I thought it was a wonderful opportunity to get a small idea of what it is like out there in the real world for the less fortunate.”  She was part of the “poor group,” but she was still able to find something memorable in this experience. She said, “I think the most impactful moment was realizing that even though we were ‘poor’ we still had each other and that is what made the meal a joyful occasion.  I would definitely attend next year and recommend it. It was a great experience, and you develop a better underst
anding of the conditions that other people around the world live in.”

The Rich Man Poor Man meal was yet another way that the STA student body came together for an important cause. As Alley Masoco said, “We are called as Christians to help everybody.” Hopefully, even more students will attend this event next year as STA continues to raise awareness for the less fortunate.