Mr. Jerry Seeger, St. Thomas Aquinas (STA) High School’s Director of Drama, dazzled the audience with his one-man play, Demerits, Detentions, and Dismissals, which included works by former teacher and famous slam poet, Taylor Mali. It was a one-night performance at the Bienes Center on January 19. For many attendees, this was the first time that they saw Mr. Seeger perform. His acting talent is the culmination of the many years that he has spent perfecting his craft.

Mr. Seeger has been an actor for the past 39 years. He realized at a young age that he had a strong passion for the performing arts: “The first time I ever acted, I was in second grade, but I think [my passion for acting] really cemented itself when I was in high school.” Mr. Seeger was hooked on the feeling that he got when he performed. He said, “The thrill of being on stage, the live performance, instant feedback from the audience, the feeling you get when you give one hundred percent and put it all out there… I feel alive when I’m on stage.” 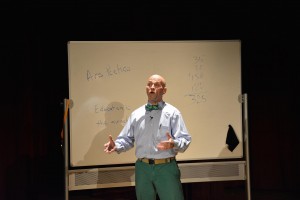 While rehearsing, Mr. Seeger was grateful to have the invaluable feedback of his family, especially his wife, who is also an actor. Mr. Seeger put a great deal of time and effort into making sure that his show was successful. It is amazing to consider that Mr. Seeger took on so many roles during the planning and production of the play – producer, playwright and actor. His experiences as a teacher greatly inspired his performance because he was able to integrate personal anecdotes related to the central theme of the play, teaching.

Mr. Seeger has “… put on different one-man shows before, and one of the biggest challenges is that, if you make a mistake, there’s nobody on stage to save you.” He continued, “You’ve got to figure it out, but that’s also the thrill. It’s all on me. Make or break. That’s why I did it: the challenge of the one-man show. You stick your neck out and see what happens. My wife has a master’s degree in Fine Arts, in acting and directing. She knows me so well as an actor… that she is able to correct me on my gimmicks. It’s great to have someone that loves you, who trusts you– and you trust them–but that will also be critical of you. A lot of the things you saw on stage came from her suggestions.”

Mr. Seeger couldn’t say enough about how much he values his family’s support. “My wife understands comedy better than any other person I’ve ever met. In South Florida, she is regarded as a comedic treasure. We’re hugely supportive of each other. My two daughters are also supportive and … they offer some keen insight, which is very, very nice.”

Many of Mr. Seeger’s students made sure to show their support!

The audience enjoyed the fact that the play represented a unique insight into the lives of teachers and the teaching profession. STA’s Service Hours Coordinator, Mrs. Bergen, said that she had never seen Mr. Seeger perform before and the show exceeded her expectations. She said, “I wanted to see Detentions, Demerits, and Dismissals for two reasons. Firstly, it related to education. Secondly because I knew Mr. Seeger would be outstanding on stage. He is a born actor and loves what he does. I would recommend this play to others because everyone could relate to it. “ Students who attended were equally moved. Samara Chahine said, “I went to support Mr. Seeger because he’s been an incredible teacher and mentor to me. He’s taught me a lot of what I know. I loved the show! I thought it was brilliant, funny, sad, and honestly just an incredible learning experience. Seeing someone who teaches acting is a great way to see the lessons he teaches you in action. He has so much knowledge to give, and so much love for what he does, it’s contagious.”  Alexa Hui said, “I have always been interested in seeing Mr. Seeger in action. He is an excellent director, so I knew he would perform a good show. I did enjoy the play. I would recommend it because it offers a new perspective on teaching. It was also very funny and captivating.”

Mr. Seeger taking a stance during his performance

Demerits, Detentions, and Dismissals was a show with a thought-provoking and compelling message. As Mr. Seeger said, “It’s about teachers. It’s about the world’s greatest profession. Name a profession which doesn’t require education. Isn’t teaching the greatest profession since it has its fingerprints on every other profession? It’s about the dignity of being a teacher. It’s about teaching the audience about what teachers do. We don’t just teach you facts and figures and theories behind things, we teach you life. Hopefully, we inspire you to go out and become your best version of yourself. Everybody in the theater were teachers, students, or the parents of students. It made the show that much easier to do because everyone was very supportive and had a connection to it.”

Mr. Seeger said that he felt like he worked “as a unit with the audience.” He was able to connect with them as he put on an unforgettable show. Although he was uncertain about whether he would ever perform Demerits, Detentions, and Dismissals at the Bienes Center for the Arts again, Mr. Seeger said that he looks forward to taking the stage at STA some time in the future. Mr. Seeger can be certain that the Raider Nation excitedly awaits another opportunity to support him!