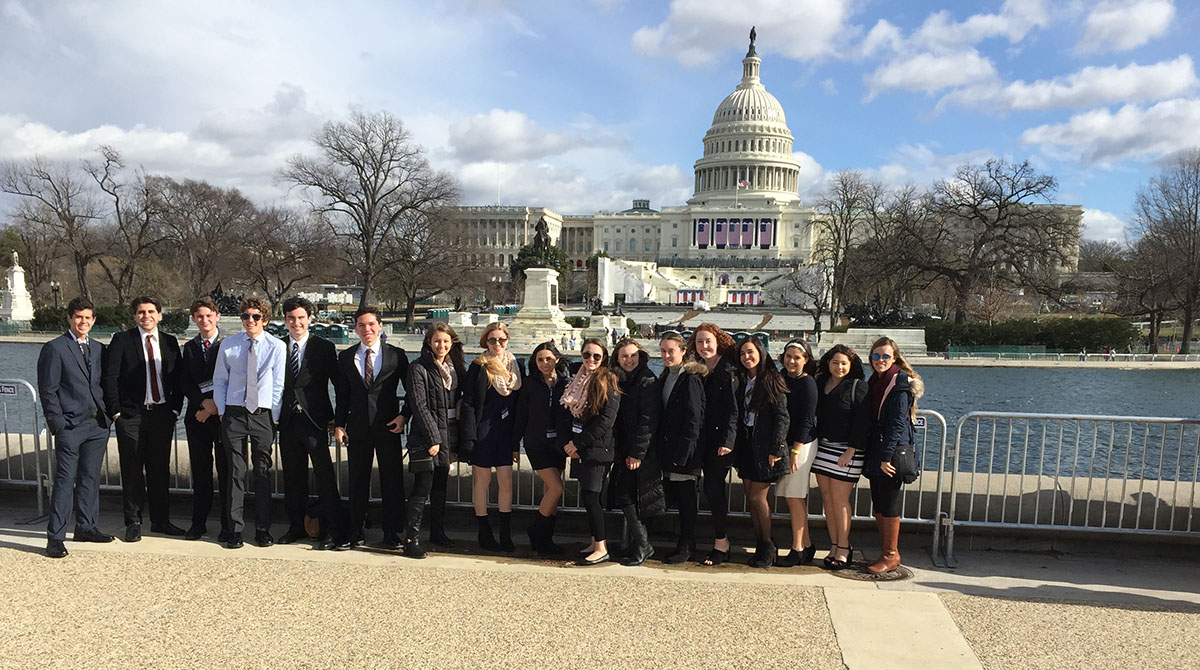 Recently, a group of Raiders attended the inauguration of President Donald Trump during St. Thomas Aquinas (STA) High School’s week-long Close Up trip to DC. In the United States, a presidential inauguration not only marks a transition of power but is also an historic mark in the direction of the nation’s leadership for the four years that follow.  Being able to attend an event of such importance is considered a once-in-a-lifetime opportunity.

Raider Review reporter, Maxwell Elam, sat down with some of the attending faculty members and students, to learn more about their experiences. AP United States and World History teacher, Ms. Bane, who has chaperoned the DC trip for about five years, said that “The experience in DC ties into the curriculum as students learn about the government, visit memorials and museums, and partake in mock government where they take roles as legislators, lobbyists, senators, and representatives.” Junior Michael McGuinness, said that the students “visited the Jefferson Memorial, the JFK memorial, the Smithsonian Museum of African American History and Culture, the MLK memorial, Capitol Hill, The WWII memorial, the Lincoln memorial, the Washington Mall, and the Vietnam Memorial.”

Each student had a different personal experience and enjoyed specific aspects of the Close Up trip. Juniors Michael McGuiness, Maria Mendoza, and Julia Martell felt that the highlight of the trip was the inauguration. However, one specific event that stood out to Senior Marty Grady occurred when, “After attending the welcome concert the night before the inauguration, the capital police stopped me and a sea of other people from crossing Pennsylvania Avenue on our way back to the Close Up buses. A few minutes passed and then we saw President-elect Trump’s motorcade. He and Mrs. Trump both waved to our crowd as their van drove by! It was surreal to see the incoming president at such a close distance!”

No matter what outstanding memories were created, all the students agreed that the trip was a unique and valuable experience. Julia Martell shared that “Having the privilege to attend the inauguration was so amazing. It was so cool to know that we were there to witness history.” Attending this annual trip to Washington D.C. is an excellent opportunity and students such as Marty Grady “highly recommend Close Up, especially during an inaugural year. Do not miss a chance to be part of something greater than yourself.” He jokingly added, “Besides, the week away from school should be reason enough to attend.”

This year’s election sparked an increase in political tension. This was apparent during the days surrounding the inauguration as protests and riots broke out around the DC area. Some Raiders ran into a situation that embodied this tension as Ms. Bane explained that “..one of the Trump supporters verbally attacked one of the students wearing a Bernie T-shirt..” Despite how people might feel about the candidates or the election results, it’s important to remember, as Ms.Bane pointed out, “The fact that one leader can step down and one can peacefully take his/her place is something you don’t see in every country and people take it for granted.”