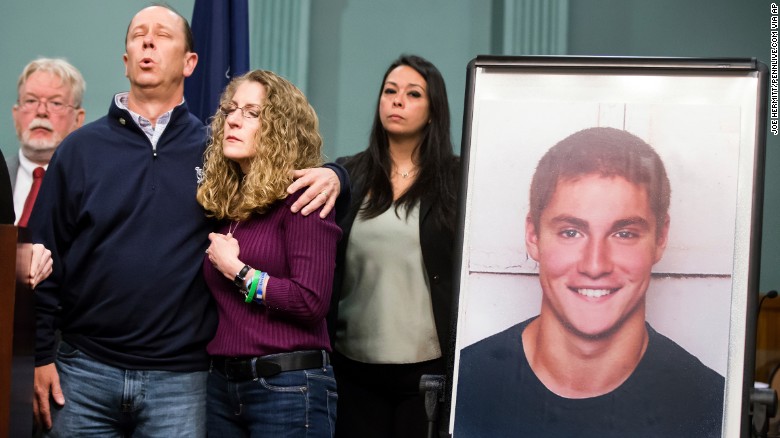 Parents of Timothy Piazza next to a picture of their son Photo: CNN/ Joe Hermitt/ Pennlive.com VIA AP

At Penn State University, eighteen students are facing charges for the death of nineteen year old sophomore, Timothy Piazza, who consumed too much alcohol during a night of partying. After twelve hours of bleeding and pain, the result of falling down a flight of stairs, Timothy Piazza died.

Not one of the pledge night attendees dialed 911, even though they were aware that Piazza was in distress. The surveillance footage revealed that they threw water on him, kicked him, and one of the members even punched him. “Eight of the students were charged with involuntary manslaughter — as was the fraternity itself, the Penn State chapter of Beta Theta Pi. The other 10 students face lesser charges, including hazing and furnishing alcohol to minors. Prosecutors also contend that the fraternity brothers tampered with evidence to try to thwart an investigation,¨ according to New York Times reporter Sheryl Gay Stolberg.  Before all of this was ruled an accident, a grand jury spent hours looking into the case. Bill Chappell of npr.org, Piazza’s injuries included a fracture at the base of his skull, a slight fracture on his vertebrae and a ruptured spleen.

At approximately 11:00 PM, on the night of the pledging ceremony, Timothy was seen falling down a flight of stairs, then at about 5:00 AM he hit his head on a metal railing. It wasn’t until 10:48 the next morning that an ambulance was called. During the incident, two students had been texting about the situation. According to NPR reporter Bill Chappell, Beta Theta Pi member Brendan Young texted fellow member Daniel Casey, “I know you know this. If anything goes wrong with the pledges this semester, then both of us are [expletive].”

All eighteen members have been arraigned and are individually preparing their legal defenses. Beta Theta Pi members who were charged with involuntary manslaughter include Brendan Young, Jonah Neuman, Daniel Casey, Nick Kubera, Michael Bonatucci, Gary Dibileo, Luke Visser, and Joseph Sala. As the Penn State community begins to heal from this tragedy, it is a solemn reminder that no form of hazing should result in death.