Coral Reef Take Over in the Science Building

Although St. Thomas Aquinas (STA) is a very innovative high school, there has not yet been a discovery as to how to hold classes out on the water.  That didn’t stop biology teacher, Mrs. Enten, and her classes from bringing the ocean to the STA campus. They built a coral reef display that is almost identical to ones that would be found along the South Florida beaches.

The idea for this project came from Mrs. Enten herself during a lecture on oceanographic biomes.  The concept was manifested when it became apparent that her students would never really be able to see a coral reef unless they were out scuba diving.  Mrs. Enten’s biology students were eager to get working on this far-out, creative idea. 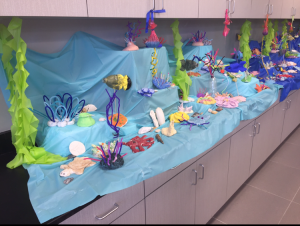 The first task for the students was to form groups and research the biome. They created  powerpoint presentations that showcased all the intriguing facts they obtained.  After the presentations had finished, each student got to work building their portion of the biome.

Everything in this project was made from scratch and sophomore Gianna Casolaro told the Raider Review that her favorite part of the project was “making the sea urchins from yeast.”

For sophomore Randy Hernandez the highlight of the event was “working with friends and getting to create these memories with classmates.”

Each student was able to contribute a unique item to the biome. With the help of Mrs. Enten, the students found a fun and creative way to bring a coral reef to the classroom. The success of this project will most likely inspire similar assignments in years to come.