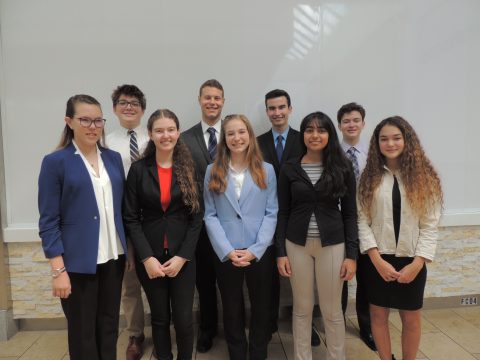 Independent Research, which is St. Thomas Aquinas High School’s (STA) version of Science Fair, is also an honors course that takes place after school on Wednesdays from 2:30 to 3:30 pm. Each Independent Research student chooses their own topic to investigate in fields such as physics and motion. There are three levels for the Science Fair: county, state, and international. STA has gone to States each year, but the last time that a student made it to internationals was two years ago. Two students will be going to states this year, and the event will take place in Lakeland, Florida at the end of March. The class does not end after Science Fair; the students will prepare for the next possible events and will start working on next year’s projects.

Independent Research started because STA science teacher Mrs. Diane Enten’s daughter Lauren Enten wanted to continue to compete in Science Fair after she graduated from middle school. However at the time,STA did not offer a Science Fair program. Five years ago, Mrs. Enten and Lauren worked with Mrs. Shearer to create the Independent Research class.

In the Independent Research class, sophomore Megan Mondek presented a project with the potential to improve the technology for developing safe football helmets. This research would help reduce the severity of impacts to the head and resulting concussions. She conducted experiments called “drop tests” during which she placed helmets on mannequin heads that had sensors attached. Megan took her experiments to the third floor of the garage where she dropped them to the grassy area below. In order to compare data results, she dropped some mannequin heads without helmets. Weights were added to the the mannequin heads and/or helmets to compensate for the weight of the wearers. Megan used three different types of helmets, Riddell 360, Xenith X2, and the Schutt DNA Pro Plus, for the tests.

At the 2018 Science Fair, there were multiple awards won in each of the categories that STA researchers chose. The two first place winners were junior Michael McGuinness and freshman Nicholas Lancaster. The two third place winners were seniors Chad Cerutti and Paige Pokryfke. The four fourth place winners were sophomores Julia Besu and Megan Mondek, freshmen Bali Henkel and Brian Cervoni-Fafian. Overall, Mrs. Enten and Mrs. Shearer were proud of their students for doing so well in their categories.