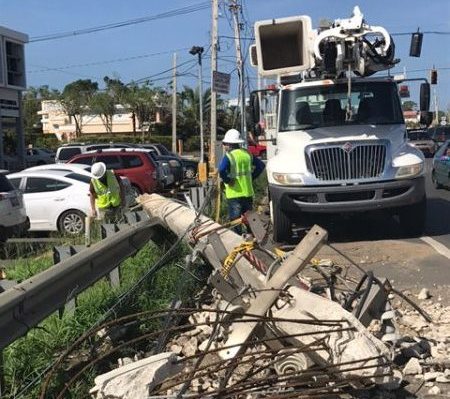 In mid September 2017, Cyclone Maria seemed to be hurtling towards the tropical island of Puerto Rico. As the days progressed, it became apparent the immensely strong storm was going to make landfall on Puerto Rican soil. The island began preparing. Some evacuated as quickly as possible. Most bought canned goods, water, and other hurricane essentials, but no one knew how long the hurricane would truly keep them trapped inside their homes. Some houses were boarded up and sand bags were placed around the perimeters. People who took these precautions believed their homes would be safe. Others were not lucky enough to have acquired these supplies. Those that did not have the resources to properly prepare their homes were left to hope their families and possessions would survive the brutal storm.

On September 20, 2017, the category four hurricane struck the island with full force.  After days of heavy rain, gigantic waves, spontaneous tornadoes, mudslides and 155 mph winds, the island went quiet. Weary citizens pushed out of the collapsed foliage that barricaded their homes. As a result of the storm, electrical power and internet were luxuries of the past. Not many outgoing calls were able to be made. Not only did Puerto Ricans have to worry about the devastation caused to their cities, they had to worry about public security. Gang activity was a concern. Others began robbing homes for any valuables. Law enforcement had a hard time reaching those in need due to the damaged or blocked roads. Recovery efforts began relatively quickly in larger cities, such as San Juan, but some impoverished communities did not experience the extent of this relief. Josefina Llenin Longo, a resident of Mayagüez told Raider Review, “My life after [Hurricane] Maria was a 360 degree turn. No power, no water, no internet, no house line phone calls. I couldn’t communicate with the rest of the world [where her children lived]. I was privileged because we didn’t suffer any major losses

and we had no water damage. We had a roof, food, and water.”  Citizens in remote towns, such as El Yune, were not as lucky.

According to World Vision the assumed death toll after the storm was 64. As the relief efforts continued, it was discovered that at least 4,600 people had lost their lives due to the storm and its effects. Although Puerto Rico received relief funds, there have been questions about how the money was distributed.

It took almost 11 months to restore power, and some small towns still do not have power, according to CNN reporters  Leyla Santiago and Natalie Gallón. Meanwhile the electrical company PREPA states, “The residence, domicile and principal office of the Authority shall be in the City of  San Juan, Puerto Rico, but its business may be conducted and offices for the purpose may be located both in San Juan and elsewhere.” Though offices are spread throughout the island, as of August 14, according to the CNN report, PREPA has yet to reach those in need. Almost a year after it made landfall, Hurricane Maria has left an everlasting footprint upon the island of Puerto Rico.