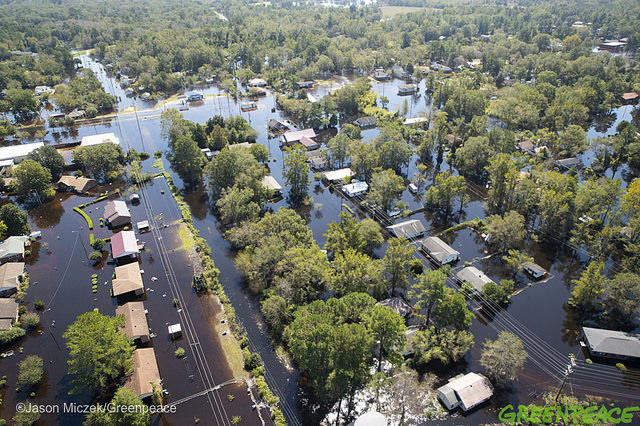 On Friday September 14, 2018 the National Hurricane Center confirmed that “…the center of Hurricane Florence has continued to move slowly westward toward the North Carolina-South Carolina border”  As the days progressed, evacuation sirens were heard blasting along the coasts of North and South Carolina where officials were concerned about flash flooding. Emily Shapiro, Daniel Manzo, Jeffrey Cook, and Meghan Keneally of ABC reported that one million people evacuated North Carolina, due to the threats presented by the storm. 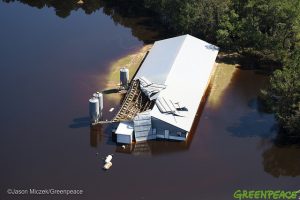 A barn is damaged and flooded by Florence. Photo Credit: Jason Miczek/Greenpeace

Soon after Hurricane Florence made landfall, it turned into a tropical storm. Residents’ relief didn’t last because Tropical Storm Florence brought massive flooding. This storm slowed to a speed of two miles per hour. The storm continuously hammered the Carolinas with heavy rainfall and high winds for several days. The Carolinas are susceptible to flooding not only because of the long stretch of coastline, but several rivers and creeks overflowed.

At one point during the devastation that loomed over the Carolinas, approximately 620,000 people were without power, according to ABC reporters Emily Shapiro,Daniel Manzo, Jeffery Cook, and Meghan Keneally. The effects of  Florence were felt by surrounding states, as well. According to Business Insider the storm “…[dumped] about 18 trillion gallons of rain over North Carolina, South Carolina, Virginia, Georgia, Tennessee, Kentucky, and Maryland… .”

As of this writing recovery efforts are still in full swing. Groups from around the country have flown to the region in an effort to help people recover from this catastrophic event. The Carolinas have a long road to recovery, but with the restoration efforts, their future seems bright.