Deprecated: The each() function is deprecated. This message will be suppressed on further calls in /home/customer/www/raiderreview.org/public_html/wp-content/plugins/js_composer/include/classes/core/class-vc-mapper.php on line 111
 Delivery Robots – Raider Review 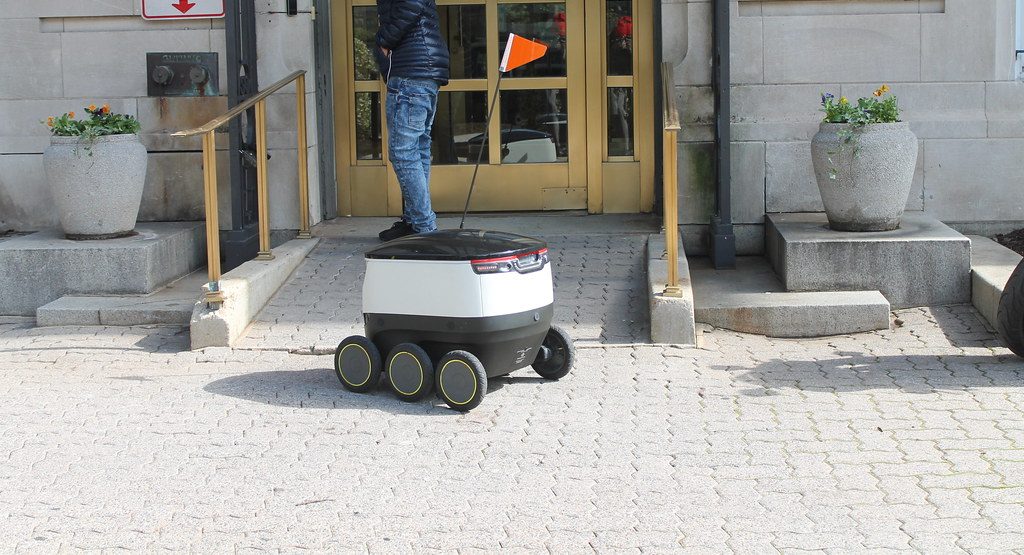 By Zatoria Thompson, Madison Schlichte and Matthew Emmanuel
MAY 8, 2019

Heads up – delivery robots are coming through! Just when drones seemed like a big deal, now robots are hitting the streets! What’s next on the agenda for the technology industry? Online stores and delivery companies are making technological advances in the air and on the ground. Though they will not be discontinuing their trucks, companies like FedEx and Amazon have decided to shake things up with these new devices. 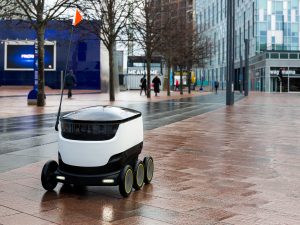 Most people who live in cities usually adapt to the speedy and snappy lifestyle they offer. An article by Jeremy Hsu of Scientific American, says that a “…growing number of city dwellers expect immediate or scheduled delivery for just about everything.” This fast paced agenda puts pressure on most delivery services. These demands can create traffic congestion because of the volume of vehicles needed. Jeremy Hsu added that Paul Mackie, the Director of Research and Communications at the Mobility Lab, said that “Deliveries are trending upwards in all dense city centers, and if city and state leaders don’t start thinking about innovations like robot deliveries, we can expect even worse traffic jams when we’re all trying to get places.” Fast Company reporter Jesus Diaz agrees and notes that “Right now, these routes are covered by humans in cars or vans. This is inefficient – it uses too much energy and worsens congestion”. Traffic jams can be huge and hazardous issues. Jeremy Hsu cited a Mobility Lab and George Mason University study, in which results indicated that  “… 73 percent of freight and delivery vehicles in Arlington were parked outside of authorized areas, often blocking bike lanes, fire hydrants and crosswalks.” Hopefully with these new robots, this will not be an issue anymore.

These little guys are already being deployed in some places like Seattle and San Francisco! Many companies are utilizing their own versions of small and helpful robots. For example, Postmates has made their own miniature and supportive delivery bots that look a lot like cute baby strollers. Diaz describes the device as a “tiny electric beast… [with] big humanoid eyes, like Pixar’s cute robot Wall-E,” which surprisingly can “carry up to 50 pounds over a 30-mile radius.” This is very impressive for its small size. Another little delivery robot is Kiwibots. These cute robots, which look 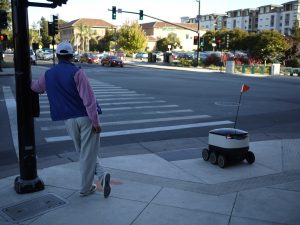 like lunch boxes, are “…already at work on the UC Berkeley campus…” and “are relatively tiny and specialize in personal food delivery (the perfect value proposition for college campuses).” Kiwibots can come in many colors and are programed with personalities. They can show different emotions with the L.E.D. eyes on their screens and blink while rolling around. The Daily Clog reporter Zachariah Nash says that “For a first-time viewer, it’s a happy surprise when Kiwibots wink and smile at passers-by.” Nash describes how these lovable devices set an example for how we should live life. He explains that when Kiwibots complete their deliveries, they hang out together. “Maybe this is their way of telling us to take a break after finishing what we need to for that day.” It is nice that people can relate to these delivery robots in an emotional way.

Not all human-helping robots are small though. Nero robots, designed by Google engineers Jiajun Zhu and Dave Ferguson in 2018, are larger than most delivery robots. Nero  is “…a completely automated and battery-powered delivery vehicle.” Daiz reports that, “According to its creators, it’s just like any other delivery van – just smaller and much safer than one driven by a human.” Big or small, these delivery robots are currently being deployed to locations such as the George Mason University campus and a limited number of busy cities in the U.S. 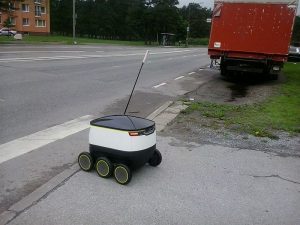 Robots delivering different things to people is a great idea, but are there any risks? Well, Forbes’ Christopher Elliott interviewed students from George Mason University who experienced what it is like to stroll the sidewalks alongside Starship Technologies’ delivery robots. One of the students noticed that the delivery robots at their university “…look both ways before crossing a street and can detect people walking around them.” There are no reports of anyone being hit by one of these devices. It is also logical that the companies would take extra precautions to ensure that their robots avoid collisions with pedestrians and vehicles.

As technology develops, new ideas flow, and some of them are converted to useful inventions. However, other ideas are left behind. Will these delivery robots be added to the list of successful invention or will they be forgotten? Only time will tell.