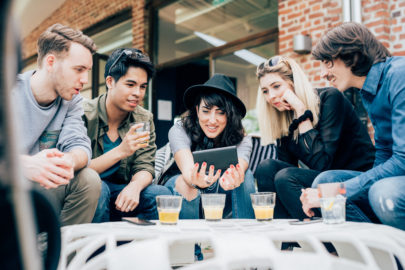 Quite often the target of criticism from older generations, millennials have been condemned for their presumed lack of understanding about current events. According to research from the The Associated Press-NORC Center for Public Affairs Research and the American Press Institute, Americans of older generations view the news more frequently than younger generations do and tend to trust these news sources more. Consequently, older Americans worry that because younger generations are less likely to seek out news from traditional media, their understanding of the world will become narrow.

Millennials have, however, shifted to a new source of media for their news. Instead of reading newspapers or watching political television programs, younger generations have begun to consume news through social media. Contrary to popular belief within older generations, this new rise of media might actually be informing the younger generations more frequently than traditional media does. Instead of seeking out information a few times a week from a newspaper, global events are woven into social media algorithms that users can view at the tip of their fingers. Even though younger generations do not actively search for news through news subscriptions as much as older generations, they are exposed to a wider range of ideas due to the diversity of the opinions on social media, compared to the one-sided opinions in traditional media. Moreover, 73% of millennials reported that they explore opposing political opinions on social media if it appears in their feed.

Eighty-five percent of millennials say that it is important to stay updated with current news, according to the Media Insight Project. Only 40% of the 1,000 millennials in the study reported that they pay for a news service or subscription; however, almost 70% revealed that they receive news daily. This high percentage can be attributed to the accessibility of news sources on social media.

Millennials are the digital generation. They often stay up to date with current news through social media platforms such as Twitter, Instagram, and Facebook. Although this younger generation has become more passive in their search for current events, social media has generated a limitless source of news, with ample opportunity for opposing opinions to be discovered.