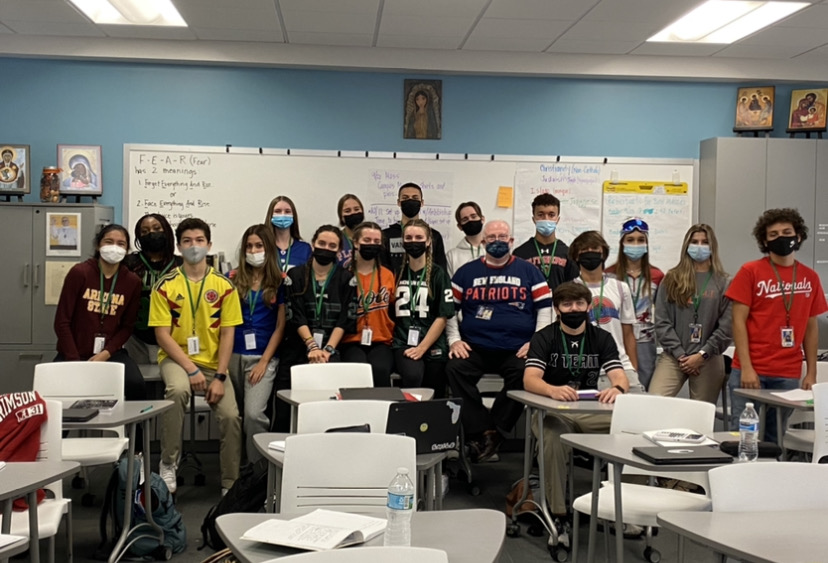 What do you think about when you hear the word Hoco? Spirit Week, football games, and dancing, maybe. For Spirit Week, every grade had their holiday this year: Freshman- 4th of July, Sophomores- New Years, Juniors- Christmas, and Seniors- Halloween. Each hallway’s decorations were worked on during the two weeks prior to Homecoming Week, and the hallways were decorated on Friday, the last day of Homecoming Week. This year’s homecoming football game was against the Cooper City Cowboys. The Rowdy Raiders posted what to wear to the game on social media, and the STA students were dressed for the occasion. Typically, the Homecoming festivities culminate with a formal dance, although for 2021, this was not the case.

Although they were not able to have a homecoming dance this year, STA students were still showing their homecoming spirit during Spirit Week. Every day there was a different theme; a new opportunity for students and faculty alike to dress up and show their school spirit. Monday was Blue and Gold Day, a day everyone was able to show their Raider spirit and represent the school wearing the school colors. Tuesday was Sports Day, where everyone was able to represent their favorite sports team. Wednesday was Disney Day; a way students and teachers were able to show off their love for Disney. Thursday was First Letter of Your Name Day; a day everyone was able to dress up as something that starts with the first letter of their name.

The last day, Friday, was  Hoco Shirt Day, where every grade wore their class shirt and attended the pep rally. That evening, STA Raiders defeated their rivals, Cooper City Cowboys, in a blowout football game; 69-0. The theme for the game was “blue & gold”, in which the students were distinguished in the crowd. The students voted for the members of Homecoming Court on Wednesday, Sept. 22.  At the halftime show, the Homecoming Court of 2021 was showcased. This year’s homecoming queen, Dakota Degenhardt, was crowned. Dakota is a senior who performs with the STA Players, plays on the girl’s varsity basketball team, and is the Lead Critic for STA’s Cappies Club.

Students leaders worked hard to keep spirits high, and STA was able to celebrate all week long. It was a great chance for the students to come together and not only  help spread the school spirit and help each other, but to also get to meet new people throughout the week. HOCO 2021 turned out to be an amazing success, both on and off of the field.