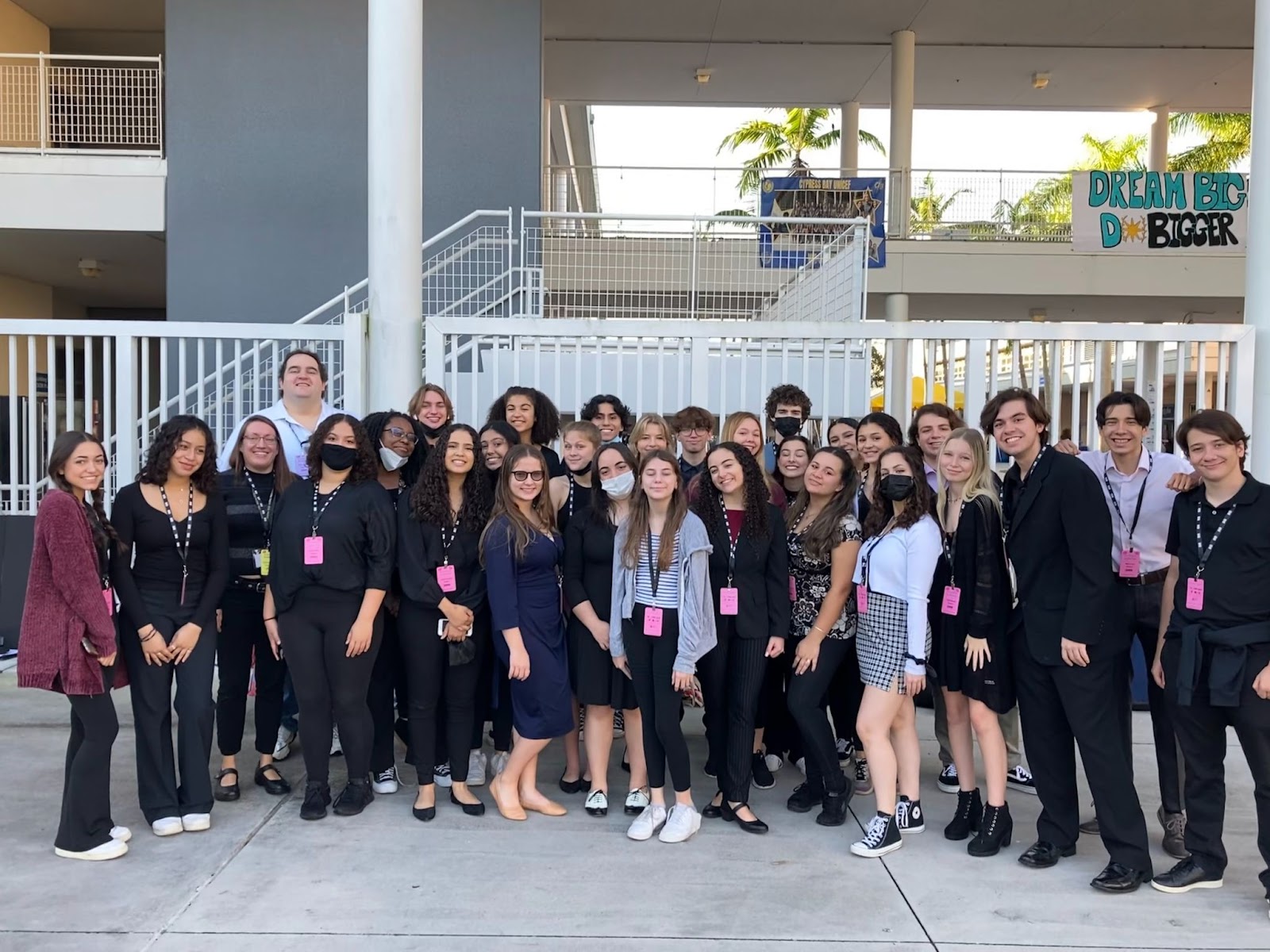 The STA Thespian Troupe 5999 will be advancing to the State Finals in Tampa after completely blowing the competition out of the water at the District 13 Thespian Competition on December 11th. Our STA student performers brought home 16 superiors and 12 excellent trophies, also earning Best in Show Critics Choice Awards in three categories and an Honorable Mention for their Large Ensemble Musical performance of “When You’re an Addams” from The Addams Family Musical.

Junior Sophia Janssens earned a Critic’s Choice for her performance of the song “Breathe” from the musical, In the Heights.  She was selected as the top overall performer at the Festival, winning the $1000 grand prize! Cameron Wasteney, Liana Genao, Mason Messingschlager and Katie Christianson earned a perfect score and Critic’s Choice for their performance of “Say My Name” from the musical Beetlejuice. Senior Brianna Braun also finished with a perfect score, singing the solo musical “A Part of That” from The Last Five Years. Jade Edwards received a Critic’s Choice for her Makeup Design for William Shakespeare’s The Tempest. Senior Alex Mayer was awarded a $500 acting scholarship for his performance of a monologue from Arthur Miller’s play All My Sons.

“I think I can speak for everyone when I say we were all a little nervous about district competition this year. We always have a lot going on and, due to the pandemic, some of us haven’t been to an actual district competition before and I myself hadn’t been since my sophomore year,” said senior performer Liana Genao. Liana described the feelings of the performers upon hearing their placement scores,  “First we found out we got a perfect score from all three judges which was crazy and then we found out that we got critics choice which was even crazier! Critics Choice meant that we were deemed to have the best performance. I don’t really remember anything besides screaming and jumping up and down for a solid five minutes.” The STA student performers are looking forward to attending the State Competition in Tampa and plan to put in a lot of work to better themselves to make sure they are 100% ready to dominate! She continued to say, “We’re all so excited to go to states; we’ve got a lot of work ahead of us but knowing we were grouped with a bunch of talented people raises the standards we want to set for ourselves so we’re going to make it even better and work on it until we kill it in states! Going to states with all of my best friends my senior year is definitely going to be on my list of top ten favorite memories this year!”

Congratulations to all of the STA student performers for their accomplishments in the District 13 Thespian Competition!