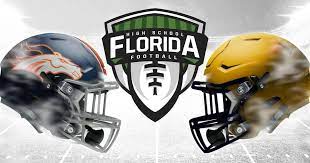 St. Thomas Aquinas High School will face off against Homestead on Thursday, December 3, at the Drive Pink Stadium. STA is coming into this match up as the number 7 High School in the country. Their record is 13-0 this season while Homestead’s record is 12-2. This will be Homestead’s first state championship game.

STA’s starting quarterback is Hezekiah “Champ” Harris, a 6 ‘2, 180 lb senior. He has 1619 total passing yards this season, 23 passing touchdowns and only 3 interceptions. STA’s starting running back is Jordan Lyle, a 6’ junior who has run for 922 yards this season. He has an average of 12 yards per carry and has helped carry STA all the way to the state championship game. STA’s defense consists of players like four star safety King Mack, Nicholas Rodridguez, Rashad Henry, and Keyshawn Johnson. Together, the STA defense has 55 sacks, 13 interceptions, and 10 caused fumbles this season.

Homestead’s QB is a 5’10”, 200lb junior who has thrown for 1034 yards this season. He has a completion percentage of  60%  and averages 20.3 yards per throw with only 2 interceptions this season. Homestead’s RB is Issac Brown, a 5’10, 200 lb junior who is also a four star recruit. He has rushed for 708 yards this season and is an elite running back. Homestead’s defense has players like Jalen Saintil, Marcus Woodly, and Eduardo Nunez. The Homestead defense has 11 interceptions, 16 fumble recoveries, and 27.5 sacks this season. While STA should win, Homestead is the underdog and is hoping to pull off what would be one of the biggest upsets in state history.