Mrs. Tina Jones, at the Heart of STA 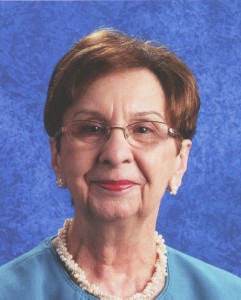 A wonderful woman and an amazing school principal, Mrs. Tina Jones has always encouraged Saint Thomas Aquinas High School (STA) students and teachers to do their best. Since 1977, Mrs. Jones has had an active role in the STA community. With dedication and care, she has been an inspiring influence for both STA students and teachers who look to her for guidance, strength, and direction.

Mrs. Jones has been an educator for 55 years. Before moving to Florida, she taught in New York, where she lived for quite some time. When she moved to Florida, Mrs. Jones took a teaching position at St. Elizabeth of Hungary, in Pompano Beach, and became the principal during the thirteen years before coming to teach at STA. Mrs. Jones arrived at STA in 1978 and began teaching many classes such as Economics, American History, World History, American Government, and Sociology. In 2000, Mrs. Jones assumed the ultimate leadership role, as principal of STA and forged her reputation as a great role model and solid leader for the STA community.

Managing a campus population of more than two thousand people cannot be an easy job, but Mrs. Jones handled it with expertise and cultivated a faith-centered community along the way. It takes strength and determination, as well as academic degrees and professional qualifications to be the principal of a school, especially one as large as STA. Mrs. Jones possesses all these qualifications: she obtained a Masters degree in education, as well as an Administrative degree. Her fortitude and determination have helped to shape the successes of the Raider nation.

Mrs. Jones explained that to become a principal, an educator must accumulate years of teaching experience, eventually take on the responsibilities as a department chair and gain some experience as an assistant principal, before finally taking on the role as the leader of a school. She said that the process of becoming a principal is so complex because it is requires cumulative learning on the job.

Many worries and challenges are an integral part of this leadership position. Some of Mrs. Jones’ main concerns were ensuring the safety of the students, faculty and staff, and maintaining a happy environment that encouraged the teachers to teach and the students to learn. Mrs. Jones believes that the job of a principal is to model excellence in academic and social development, particularly for the students. Principals must provide good examples for their students who look up to them, otherwise how would students be expected to behave appropriately? Mrs. Jones, who adheres to this philosophy, maintained a happy and safe environment at STA, while serving as an amazing role model for STA students.

Next year, Mrs. Jones will not be returning to STA as a principal. That role has been handed over to Dr. Denise Aloma, but Mrs. Jones will continue to actively contribute to the STA community because she promised that she would, and, for Mrs. Jones, “a promise is a promise.”

Mrs. Jones is also an avid reader who can finally look forward to reading new books, knitting, and volunteering some of her newfound free time. She has certainly left an indelible mark on STA.  Mrs. Jones, who will definitely be missed, described her favorite part of being in the STA community as “… having the opportunity to try to make a difference. There are so many things that have touched me, and I cherish all the memories I have had here.” While many of the experiences that Mrs. Jones has had at STA are lodged in a special place in her heart, there will always be a cherished place in the heart of STA for Mrs. Tina Jones. Raiders forever!