The European Migrant Crisis is not a new issue, but has it recently became too severe to ignore. The progressive influx of migrants and refugees fuels debates among Europe’s leaders. Meanwhile, millions of refugees, mostly from Syria, risk their lives to secure a better and safer future.

Before the Arab Spring of 2011, Muammar Gaddafi, the former Prime Minister of Libya for almost 42 years, headed up an authoritarian government guilty of numerous human rights violations. According to The Week, Gaddafi and the European Union arranged several agreements that would enforce stricter border controls in 2004. Despite Gaddafi’s cruel leadership and reports of migrant prison camps in Libya, European leaders turned a blind eye for as long as African asylum seekers were detained at Libya’s border. After Gaddafi’s death in the Arab Spring, several anti-government protests who were demanding political freedom, awakened revolutions across the Middle East. Without a stable government, Libya fell into chaos. Shortly after, Syria began its civil war. However, without Gaddafi’s reign, it became possible for both refugees and migrants to travel through Libya and reach the Mediterranean. 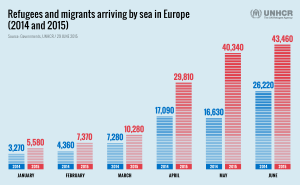 In the past year, the influx of migrants has reached a critical peak. The majority of these migrants and refugees are from war-torn Syria. Since the war began, Syria’s economy has lost the “equivalent of 229 percent of the country’s 2010 gross domestic product.” In June, the United Nations Refugee Agency (UNHCR) reported that 34% of refugees, who arrived in Europe by sea, were Syrian. As terrorist groups such as ISIS and al-Qaeda attacked and killed civilians, thousands of fleeing Syrians ended up in crowded refugee camps. According to Frontex, the EU border agency, Syrians, Afghans and Iraqis make up the majority of the migrants fleeing from conflicts with ISIS and the Taliban. Somali and Afghan refugees abandoned their homes to escape escalating violence. In an interview with the BBC, Sami Khazi Kani, an Afghan refugee said, “The Taliban are killing us, the Taliban are kidnapping us… But the media only broadcasts what is happening in Syria.” Eritrea, referred to as “Africa’s own North Korea” by the news site Vox, is a small North African country that is ruled an oppressive dictator.

Many refugees began their journey in the back of a truck, which smugglers use to transport them through the desert and into Libya. These trucks are often enclosed vehicles, with poor air circulation, which have been known to cause refugees to die of suffocation. According to Flavio Di Giacomo, the spokesperson for the International Organization for Migration (IOM), if the refugees survive this journey, they are held in small houses or detention centers in Libya until they are able to pay to be released. African migrants pay approximately $400 to $700, per person, to cross the Mediterranean, while Syrians are charged as much as $1500 per person for passage on ships that are often overcrowded and unseaworthy. Most of those who travel by sea arrive in Greece and Italy with hopes of asylum. 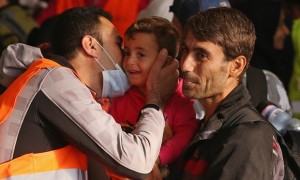 As countries like Italy and Greece struggle to cope with the overwhelming influx of refugees, more asylum seekers are flocking to other European nations. Germany, Sweden, Italy and France received the majority of refugee applicants and granted residency to almost two-thirds of them. However, many European countries, like Hungary, have taken measures to bar migrants. Hungary cut funds preventing safe sailing for refugees and barricading its borders. On September 24, Hungarian officials built a 109-mile, barbed-wire barrier along its border, in order to restrict the flow of migrants. According to the BBC, many migrants who are currently in Hungary “have been refusing to register” because they wish to continue their journey to Germany, where they intended to apply for asylum. In defense to his country’s harsh border patrol, Hungarian Prime Minister Viktor Orban said, “We shouldn’t forget that the people who are coming here grew up in a different religion and represent a completely different culture. Most are not Christian, but Muslim.”

Other countries have avoided passing policies that would make a migrant’s journey less dangerous. For example, the United Kingdom cut the funding for Mare Nostrum, a search and rescue program that once saved the life of 150,000 migrants per year. In response to the outrage of human rights advocates, the Foreign Office ministers claim that the British government is “simply discouraging more people to attempt the dangerous sea crossing.” As of 2015, over 500,000 migrants have sailed across the Mediterranean sea; the UNHCR reports more than 2,500 of these people have died at sea.

In an attempt to reach an agreement, proposals for “burden sharing” have been the focus of recent EU debates. Although there were suggestions that EU member nations set a quota to accept 160,000 refugees, nations such as Hungary have refused to consider such an agreement. Smaller nations, like Croatia, are only capable of hosting a few thousand migrants; however, by September 15, more than 20,000 migrants crossed Croatia’s borders.

Another obstacle is the Dublin Regulation, an EU rule that forces refugees to remain in the first country in which they arrive until their asylum requests are processed. As a result of this rule, thousands of refugees have been stranded in Greece. German Chancellor Angela Merkel has called on the EU to reexamine its current asylum policies.  As a result, Germany has suspended the practice of the Dublin Regulation within its borders.

President Obama, in an effort to demonstrate the United States’ solidarity with the EU position on processing refugees, instructed his administration to accept at least 10,000 Syrian refugees by next year. Aid groups have criticized President Obama for not accommodating a larger number of refugees. “Ten thousand is just an embarrassingly low number given the scale of this crisis, and the U.S. has long been a global leader in resettlement,” said Eleanor Acer, Director of Human Rights First, a non profit organization. Politicians such as Peter King, the U.S Representative for New York, have expressed their displeasure with the decision to host refugees. Certain politicians argue that “these people are coming from a country filled with Islamic terrorists and Americans do not want another Boston Marathon bombing situation.” However, as of September 10, 2015, the United Nations High Commissioner for Refugees has already referred 18,000 cases to the United States for resettlement.

As the number of migrants continue to rise, the solution to Europe’s crisis appears insurmountable. The EU remains divided in their positions on immigration and how to accommodate the overwhelming amount of refugees that have nowhere else to go.

In his address to Congress, Pope Francis called on nations around the world not to be “taken aback by their numbers, but rather view them as persons… We need to avoid a common temptation nowadays: to discard whatever proves troublesome.”