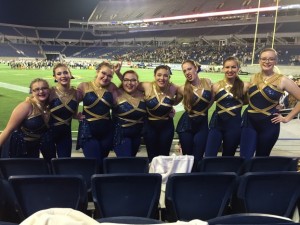 each personality type. Whether a student prefers sports, scholastics,

the arts, or social life, there’s something that will fit every mold.

Because of the large variety of options at STA, it would be easy to miss

an opportunity. So here is a suggestion for those who are

looking for a combination of sports, creativity, and a sense

of community, Color Guard is a great team to  join. The STA Color

Guard is considered part of the school’s marching band, the STA

Marching Raiders.  Joining the Color Guard is the perfect way to

have the experience of being on a team and socializing with all grade levels.

The moderator of the STA Color Guard is Ms. Cristina Cuervo, an STA alumna.

Ms. Cuervo was a member of the STA Color Guard team when she attended St. 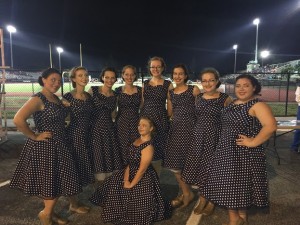 interested in this sport. She has been overseeing the team at STA since 2013.

silks flying from them along with shorter swing flags. The Color Guard

choreographs their dance steps and maneuvers based on the music

and movements of the school band. Being on the STA Color Guard

team means that you attend all of the football games. The team

performs on the field during halftime, along with the band. They also

perform specific dance routines on the sidelines to accompany each

song that the Marching Raiders play during the game. 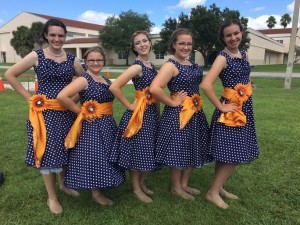 The Color Guard is open

exploring their talent in an unconventional way. There are no

prerequisite skills, so why not try out? For additional information