Theatre Arts Teacher of the Year

Mr. Seeger at the Award Ceremony

Mr. Seeger has been a drama teacher, as well as the drama director, at STA for 11 years. Mr. Seeger attended The University of Missouri-Columbia, where he studied Theatre Arts. He was later taught by Emmy Award winner, Burt Reynolds, Tony Award winning director Jose Quintero and Tony Award winner Charles Nelson Reilly while doing postgraduate work at the Burt Reynolds Institute for Theatre Training. Mr. Seeger has two daughters, Ana and Emma Seeger. Emma, a sophomore at STA, wants to follow in her father’s footsteps by studying Theatre Arts. Unlike her father and sister, Ana, a Junior at FSU, wants to become an FBI agent. 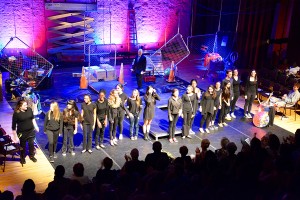 Mr. Jerry Seeger has been in many plays and commercials. The most recent play he was in was a one-man show, titled Demerits, Detentions & Dismissals. Mr. Seeger explained, “I created this play by using the works of  Spoken Word artist, national slam poet champion, teaching advocate and former teacher Taylor Mali.” He also starred in a film named The Square Root 2, with Scandal, Castle and NCIS actor, Darby Stanchfield and Brett Rice, who played roles in Remember the Titans, Forest Gump and the newest rendition of Footloose.

Mr. Seeger has directed many award winning school plays including The Madwoman of Chaillot, Godspell, Twelve Angry Jurors, Our Town, Grease and Guys and Dolls. Mr. Seeger is an incredible role model, for not only drama students, but also for any students who want to pursue something their passion.