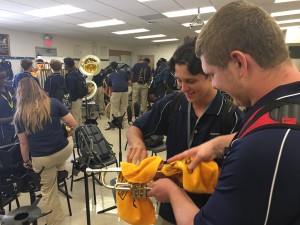 Try to imagine what would happen if the band and varsity football team had a bet against each other. Well, that’s just what happened on September 5, 2016. Coach Tommy Mygrant, Offensive Line Coach, bet Band Director, Mr. Richard Bradford, that his students could not play Hang On Sloopy, an Ohio State song, at the next game. When Mr. Bradford asked why that particular song, Coach Mygrant explained, “that’s where I went to school.” He wagered that if the band could learn and play the song, his offensive line football team would clean the band’s instruments. Coach Mygrant thought that this might be a good way for the football players and the band members to get to know each other. When the band members asked what they had at stake, Mr. Bradford told them, “You don’t wanna know. We never got to the point of discussing what the band kids would have to do because I knew my guys could do it.” So it was settled, the band and the football team were finally coming together for this friendly challenge.

September 9 arrived, and it was the day that the band was supposed to play Hang On Sloopy. While they were performing the song, Coach Mygrant told Mr.Bradford that he thought they were doing a great job. Mr. Bradford mentioned that they had learned the song in 30 minutes, just before the game started. Then Mr.Bradford reminded the coach that the football players would have to step-up and clean the instruments. On September 16, the football players reported to the band room. According to Mr. Bradford, “This is supposed to be all in good fun, and I think the offensive line can’t believe they’re doing this.” He and Coach Mygrant are working hard to create a good rapport between the band members and football players. This camaraderie is something that they hope will become a tradition for future Raider musicians and athletes.