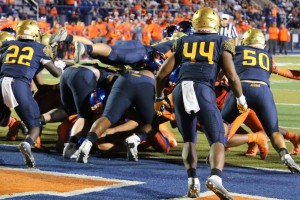 For a much anticipated battle, the Saint Thomas Aquinas (STA) Raiders traveled to Las Vegas to take on the number one ranked team, the Bishop Gorman (BG) Gaels. Both teams featured top recruits, already committed to Division One universities.

From the outset, and for much of the first half, the defenses kept the high-powered offenses in tact. Both 4-star corners, Alex Perry (BG) and Asante Samuel Jr. (STA) were able to contain top receivers Tyjon Lindsey (BG) and Trevon Grimes (STA). At the half, Gorman managed to muster only a field goal to take a 3-0 lead. 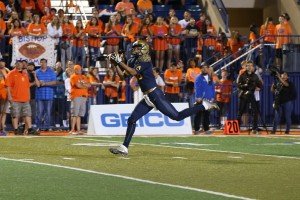 At the start of the second half, STA received the kick and was able to score the first touchdown of the game on a trick play when wide receiver Mike Harley threw a 53-yard pass to Trevon Grimes to take the lead, 7-3. For the rest of regulation, points were hard to come by and the score only tallied up to 10-10, forcing the game into overtime.

In the first extra session, STA quarterback Jake Allen hit Jordan Merrell with a 10-yard touchdown pass. Needing a touchdown to tie, Gorman answered with one of their own. This forced a second overtime where the Aquinas defense held Gorman on downs. With the Raiders destined for victory, kicker Marco Salani attempted a 25-yard field goal that was blocked, propelling them into a third overtime. When the Raiders received the ball, they converted with a touchdown, moving the score to 24-17. Gorman quarterback Tate Martell threw a touchdown to cut the deficit to one. The Gaels lined up for an extra point attempt that was stalled by an offsides penalty. Gorman Head Coach Kenny Sanchez decided to go for the win with a 2-point try. His decision paid off as the number one team in the nation powered its way into the end zone for the 25-24 win. The Raiders, now 3-2, moved back to number 11 in the national rankings with Gorman maintaining the number one position.