Some of the baskets that were included in the raffle 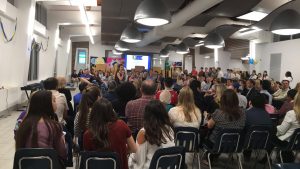 It was a full house!

Thespians that were inducted into the International Thespian Honor Society