Sports is the pinnacle of American culture. The St. Thomas Aquinas (STA) community is no exception. Each year, ten teams are scheduled to play against St. Thomas Aquinas’ football team. This year the first opponent was St. John Bosco High School. They traveled all the way from Bellflower, California, to Fort Lauderdale for the chance to take on the Raiders.

In an exclusive pre-game interview, Asante Samuel Jr. told the Raider Review that he and his teammates approach each game with this can-do attitude, “We just go out there, and work hard.” When starting quarterback Curt Casteel was asked  if he thought the game would draw a large crowd, he responded, “Yeah,  there will probably be a lot of people, just because it is one of our biggest games this season.”

Prior to the game, Mr. Monty McDermott, Director of Athletics for St. John Bosco told Raider Review that it is always better for the team to have fans at their games, but “… you can’t blame people for not being able to afford the trip here.” However, he did feel confident that his team was ready to take on the Raiders.

USA Today predicted that the score for the St. John Bosco vs St. Thomas Aquinas game would be 41-28 in favor of St. John Bosco. However, starting running back Daniel Carter’s reaction to this prediction was, “It’s not an official score, and we just have to go out and play our game.”

Following the big game, with a score of 9-3 in St. Thomas’ favor, Raider Review reporters asked St.Thomas’ Head Coach Roger Harriot if he was satisfied with the outcome. He said, “Well, you’re never really satisfied as a coach, but I’m pleased with the effort that our players gave on the night against St. John Bosco. We did a great job of performing on defense standpoint and special teams; we definitely have some work to do with regards to the chemistry and execution on offense. I’m optimistic we’re moving in the right direction and looking forward to finishing the season strong.” 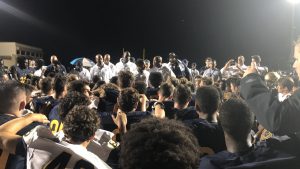 With this big win under the Raider’s belt, the STA community cannot wait to see what is in store for the remainder of the season.