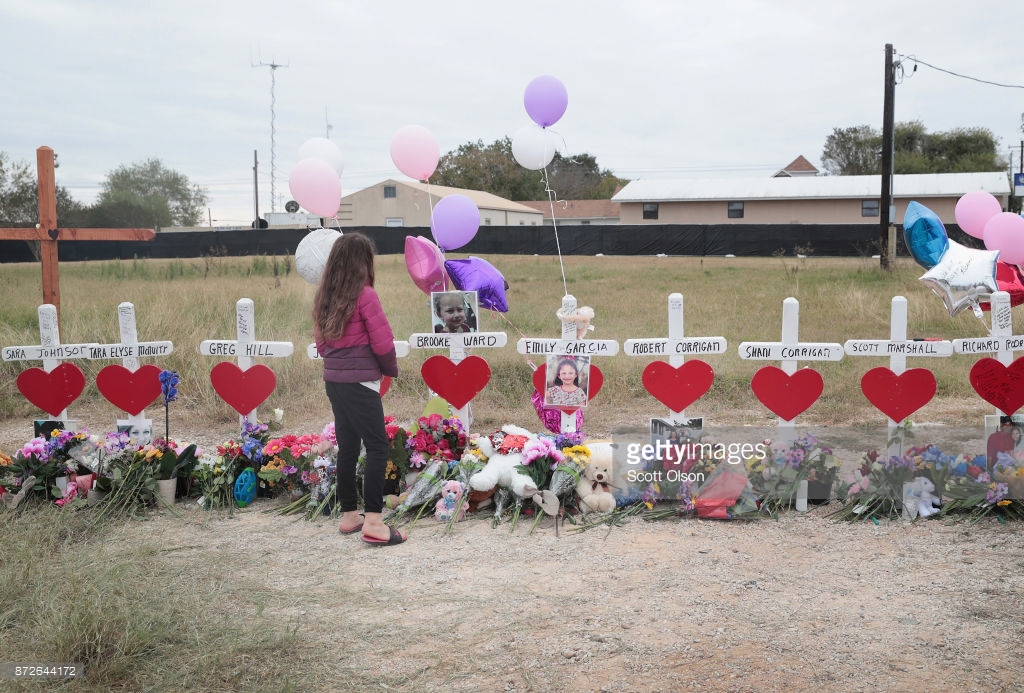 Photo by: Scott Olson / Staff/ Getty Images
Memorial for the lives that were lost

A man by the name of Devin Patrick Kelley walked into a church with an assault rifle, 15 magazines of ammunition and took retribution on the worshippers. According to a CNN article by Ralph Ellis, the victims ranged from 17 months to 77 years old. Counted among the many people who lost their lives were Lula White, the shooter’s grandmother-in-law and Annabelle Pomeroy, the pastor’s 14-year-old daughter. Of the 20 people who were injured, ten remain in critical condition. In a CNN.com report by Lawrence Davidson, Darran Simon and Doug Criss, the Sutherland Springs County Sheriff Joe Tackitt said that,”… nearly everyone [in the church] had some type of injury”

NBCnews.com reporters Tracy Connor and Daniel Arkin obtained information indicating that Kelley broke out of the Peak Behavioral mental health facility. A former employee of Peak Behavioral, Xavier Alvarez, told NBC News that  “[Kelley] verbalized that he wanted to get some kind of retribution to his chain of command.”  On June 6, 2012, Kelley jumped a fence in the middle of the night and headed to a bus terminal in El Paso, Texas. The next day El Paso authorities, along with Alvarez, restrained Kelley as he was exiting a cab. Alvarez added, “He put up no fight, he laid on the ground and police were there in seconds… He was very quiet, but he did mention that, given the opportunity, he would try to go for the [officers’] guns.” 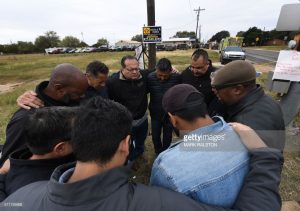 Alex Horton of the WashingtonPost.com, reported that in 2014, while Kelley served in the Air Force, he received a general court-martial for two domestic assault charges. He was said to have assaulted his ex-wife and stepson, which resulted in confinement for 12 months after which he was released with only a bad-conduct charge. The Washington Post report went on to say that the Air Force should have entered Kelley’s name into the National Criminal Information Center database under the dishonorable discharge category, which would have prevented him from purchasing a weapon. However, Kelley was able to purchase a weapon. According to Mr. Horton, a representative from the firearms retailer, Academy Sports, said that they ran his name through federal background checks for 2016 and 2017. Kelley’s report came back clear and Academy Sports was able to sell him two guns. 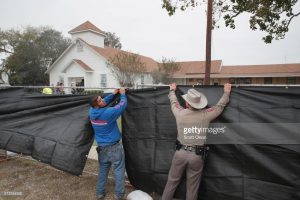 NPR.com’s Scott Neuman, reported that after his attack, witnesses saw an armed citizen shoot Kelley in the torso and leg. He was identified as Stephen Willeford, a former National Rifle Association (NRA) instructor. He told reporters, “I think my God, my Lord protected me and gave me the skills to do what needed to be done, … [I] was scared to death.” He then continued to say  “I was scared for me. I was scared for every one of them and I was scared for my own family that lived less than a block away.” When Kelley started to speed away, Willeford stopped a man Johnnie Langendorf who was passing in his pickup truck and explained the situation. As the two men pursued, they witnessed Kelley’s truck hit a road sign and then flip over into a ditch. Willeford got out of the truck and yelled to Kelley, “Get out of the truck, get out of the truck” but when authorities and investigators arrived they determined that he had died from a self inflicted gunshot wound.

Even though the shooter is gone, the people of Sutherland Springs, Texas are still faced with grief over their losses. The country offers prayers and the hope that the victims will be strong during this dark time.