A Famous Face on the Football Field 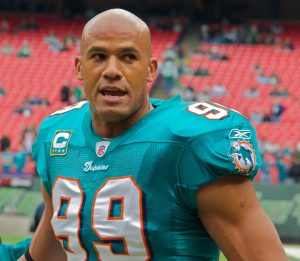 Taylor at a Jets-Dolphins game in 2009. Photo: Wikimedia Commons

Former NFL player, Jason Taylor, is quite the local celebrity. Now, at St. Thomas Aquinas (STA) he’s even more widely recognized because this year he was welcomed into the football program.

Taylor has had an extensive and successful career in football. He played in the National Football League (NFL) for 15 years. Most of his career was spent playing as a defensive end for the Miami Dolphins, until he left Miami after 13 years to play for the Redskins in 2008. Then, in 2010, he played for the Jets, before returning to the Dolphins for one final season in 2011. Some of his greatest achievements include being named the NFL’s Defensive Player of the Year in 2006, with 62 tackles, and being inducted into the Pro Football Hall of Fame this year.

Coach Taylor joined the STA football team last spring as the defensive line coach. Although he motivates the players to follow their dreams, he reminds them to always prioritize school. In a recent interview, Coach Taylor said that, “The guys that get the chance to play in the league for however long they play, they’re very fortunate. The odds of making it are so small. School always has to be first.”

In 2016, Coach Taylor invited Coach Harriott to speak to his youth team, the Davie Broncos. They developed a meaningful relationship, and when the defensive line position became available, Coach Harriott asked him to interview for the position. When asked about how Coach Taylor has impacted the team, Coach Harriott said, “His reputable presence, professionalism, enthusiasm, and love for the game have enabled him [to] be an effective instructor and source of inspiration for our entire football program.” He and Coach Riley agreed that Coach Taylor would be “a holistic asset” to the team. Coach Harriott says that the team is “fortunate to have him coaching and mentoring” them. 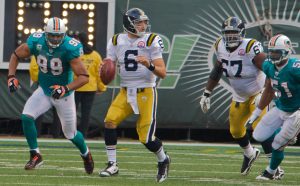 During the interview, Coach Taylor added that, “Lots of really good players, really good people” are involved with the Raider football team. As a coach, his goal is to “mold good young men.” When asked about the transition from playing in the NFL to coaching high school, he said that,  “[Coaching at STA] is a fun challenge, and it’s really rewarding to see them learn and grow.”

STA football players and fans are excited to have Coach Taylor as the newest addition to the football program. It will be great to see the football team have even more success in the future with Coach Taylor’s guidance. STA anticipates that he will have a positive impact on the  Raider community.