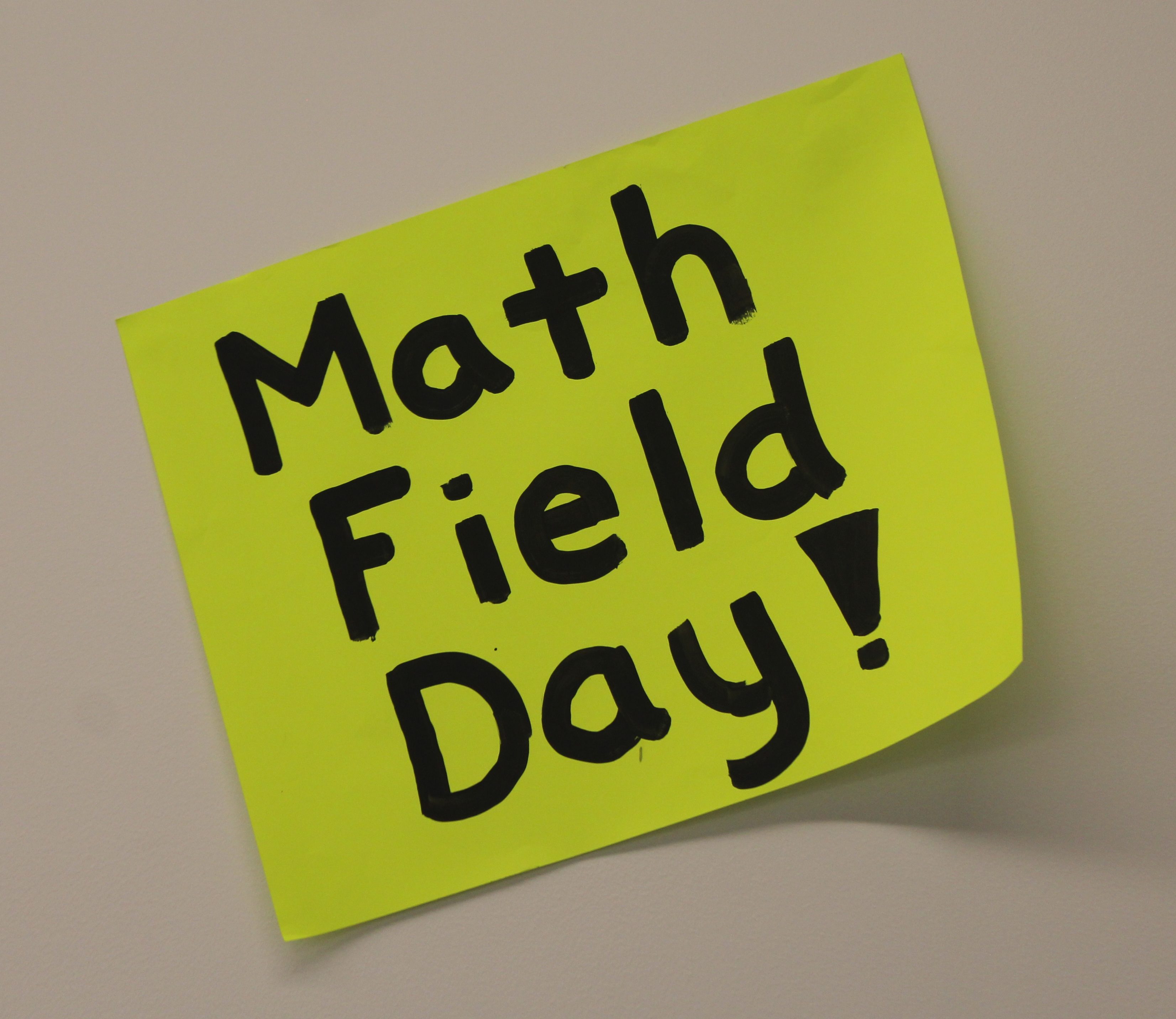 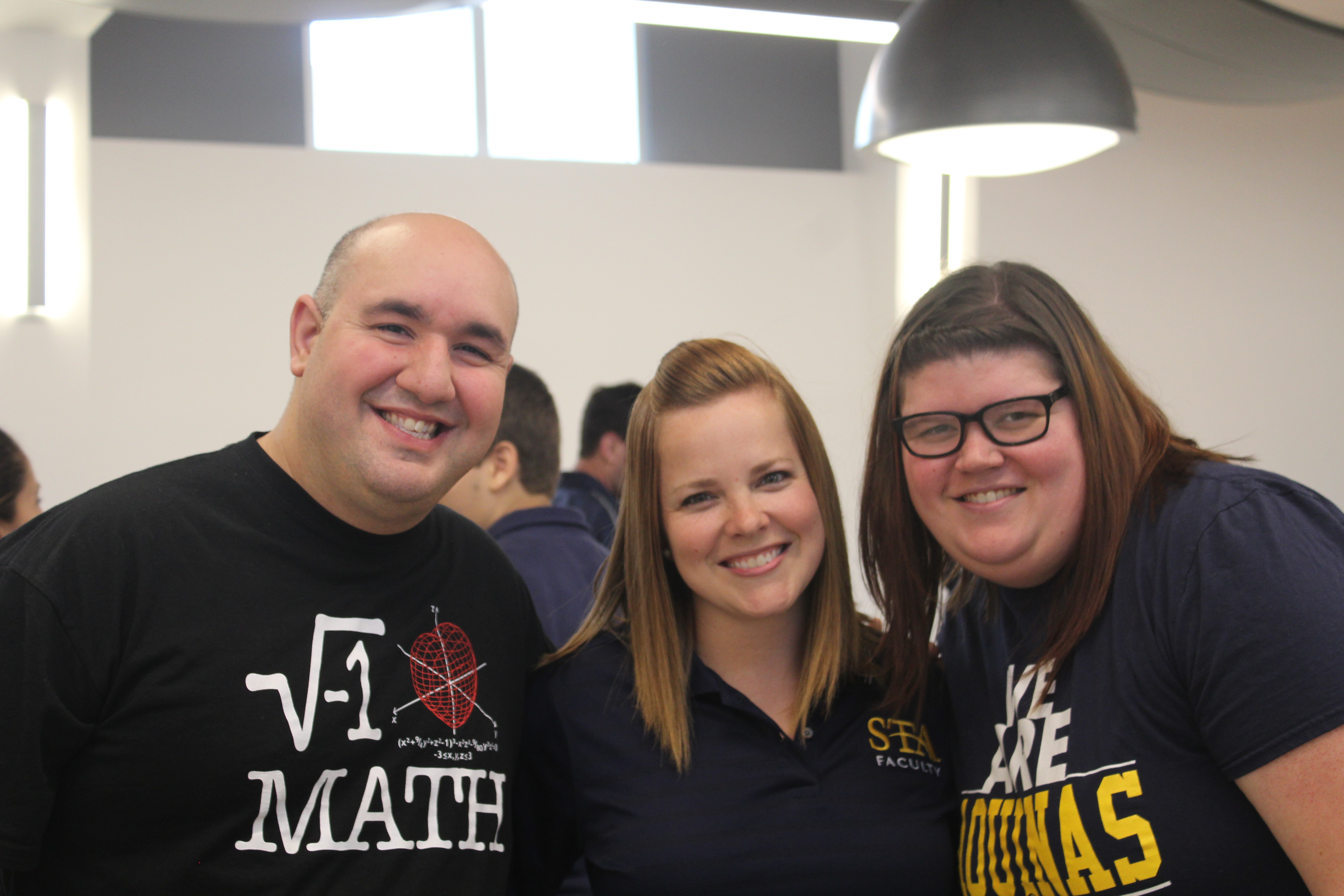 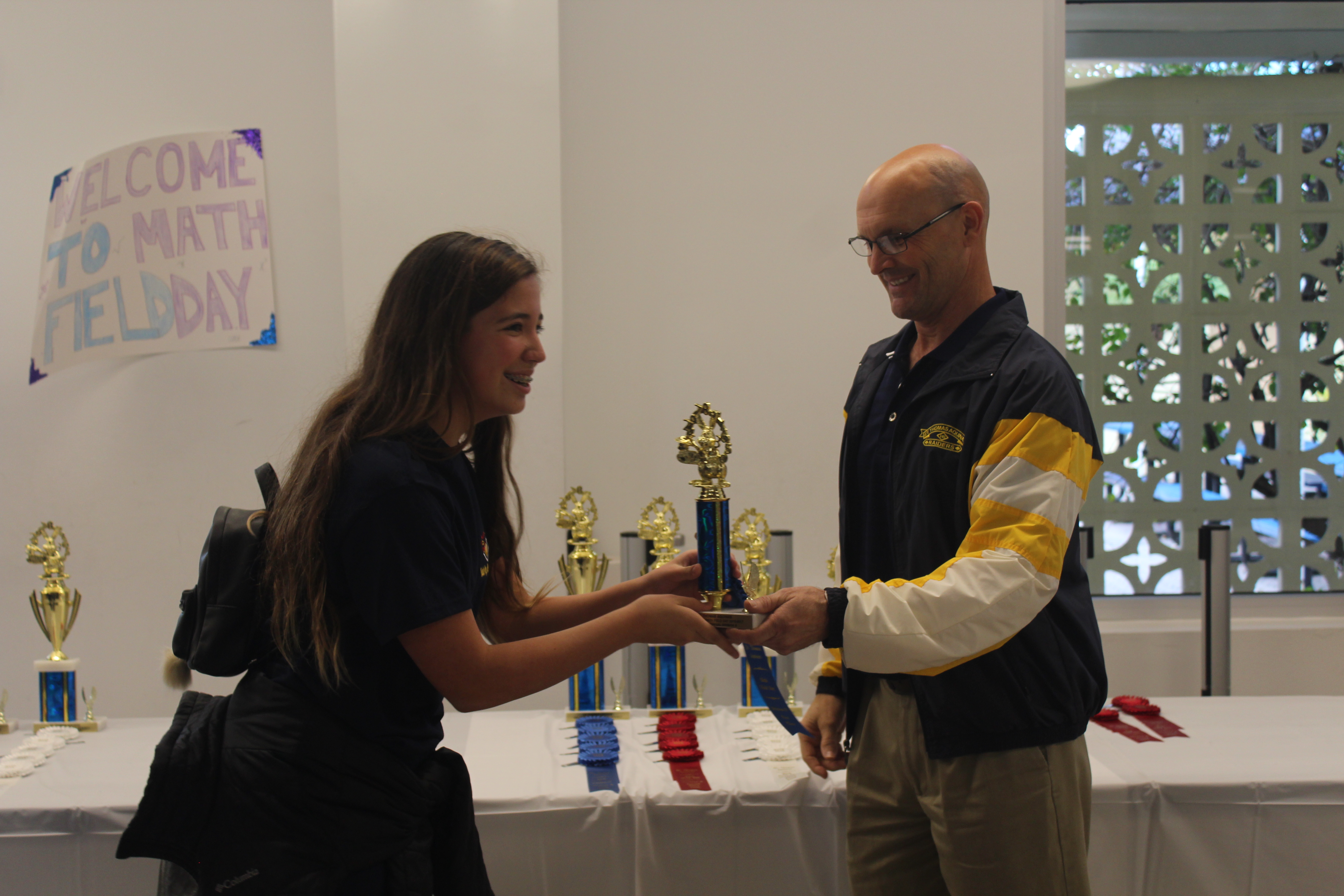 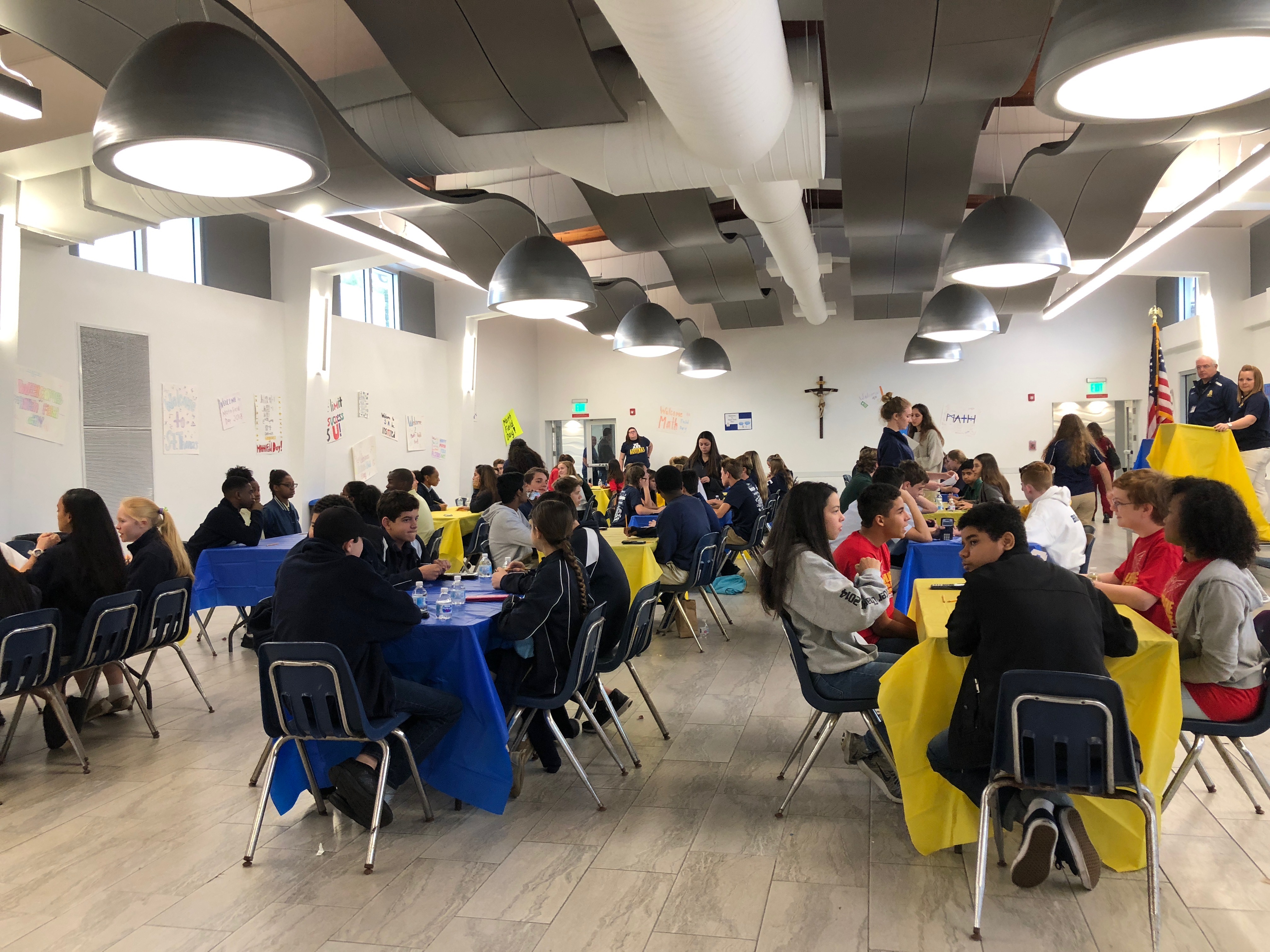 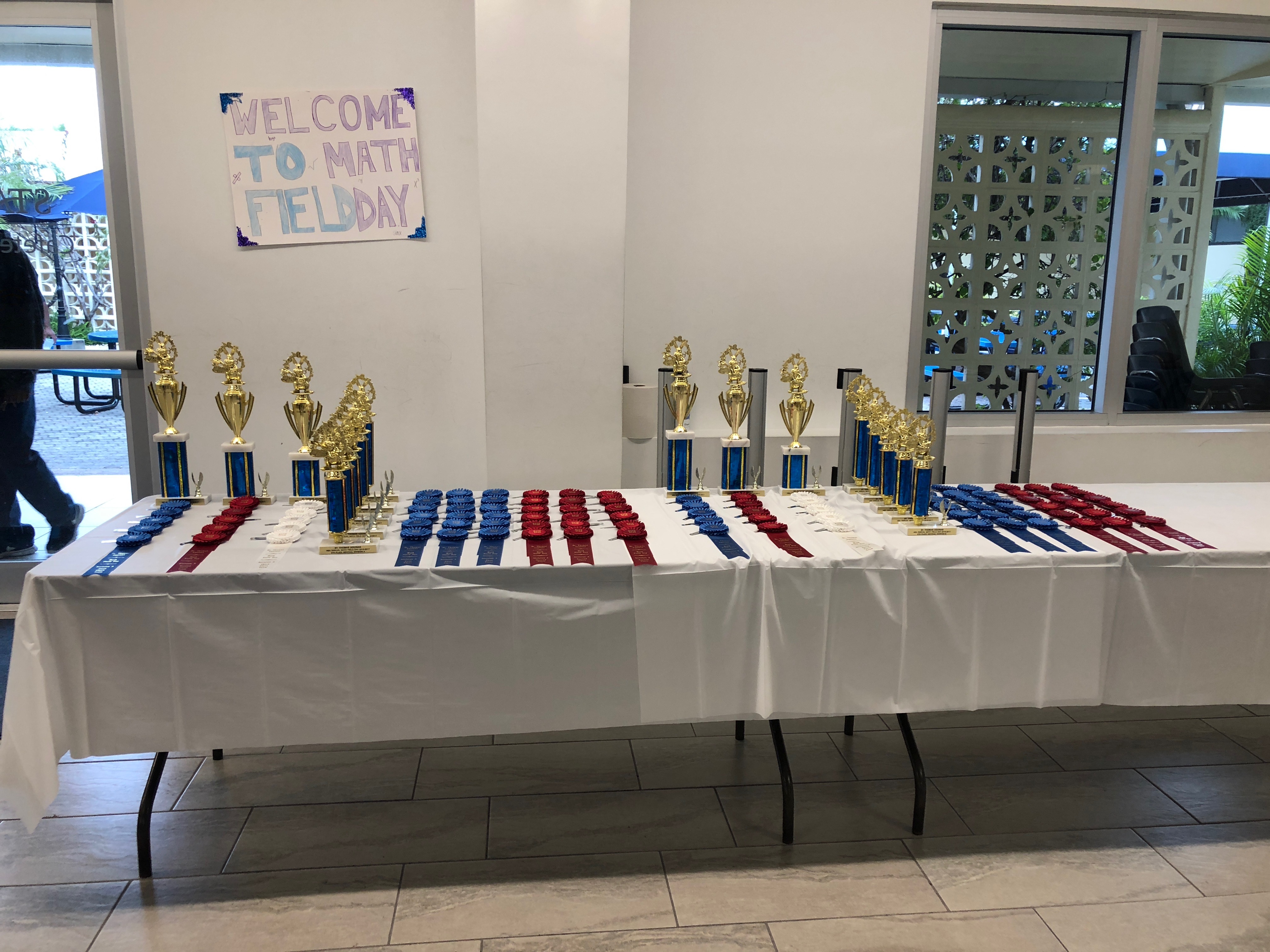 On January 20, 2018, St. Thomas Aquinas High School (STA) hosted the 2018 Catholic School Math Field Day. Catholic schools came, from Miami-Dade and Broward counties, in teams of five, to compete. STA’s Mathematics Department Head, Mrs. Jennifer French, organized a day of individual tests for all of the participants, and one competition per division, where the teams competed on behalf of their schools. The team competition took place in the cafeteria, and there was a designated area for parents and teachers to watch. The tensions were high as the students rushed to find the correct answer before time ran out.

Sixth, seventh, and eighth graders were eligible to compete in the Math Field Day. The eighth-graders competed as Division A, while the sixth- and seventh-graders were Division B. Among the schools that competed were All Saints, Annunciation, Mary Help of Christians, Nativity, St. Ambrose, St. Andrew, St. Bonaventure, St. Coleman, St. David, St. Gregory, St. Helen, St. Jerome, St. Mark Catholic, St. Mark Episcopal, and St. Rose of Lima. While the eighth-graders took the individual tests, the sixth/seventh-graders participated in the team competition, and vice versa. The team competition was made up of seven difficult questions, for which the students were given four minutes per problem. The individual tests were administered in the 200s-hallway, closely monitored by various STA faculty members.

An STA student or math teacher was assigned to each table during the team competition. They let the students know how much time remained for each question and took their answers to STA Math Teacher Ms. Beth Albrecht, who delivered them to the judges. Once all of the answers were turned in, Mrs. French announced the correct answer.

Trophies and ribbons were awarded for the first and second place individual test winners in each division. The top three schools in each division also received awards. In the end, Andrew DiStefano from Nativity took home Division A first place, with Christopher Enlow from Mary Help of Christians taking second place and Paola Namphy from All Saints placing third. In Division B, first place was awarded to Sasha Cartagena from St. Gregory, second place to Liam Connor from St. Gregory, and third went to Max Pannell from St. Gregory. In the team competition Division A, first place was Mary Help of Christians, second went to St. Gregory, and third to Nativity. In Division B, St. Gregory took home first place, St. Coleman took second, and Nativity finished third. It was amazing to witness such young minds solving such complex problems!