STA Springs Into the Show

By Isabella Randazzo, Julia Ruggieri, and Tyler Stafford
MAY 22, 2018 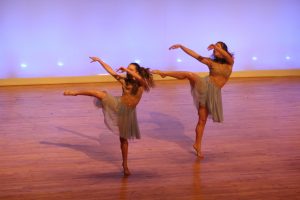 On May 1, the St. Thomas Aquinas High School (STA) dance classes, Chamber Singers Freshman Choir, and Chorale regrouped, this time for the Spring Dance, Vocal Concert & Art Show. The same musicians and dancers, who previously performed at the 2017 Christmas Vocal and Dance Concert and Art Show, captivated the audience once again.

The show opened with 13 routines that featured students from Dance Techniques I and II, as well as Choreography I and II. Dance Techniques I and II opened the show with Just Dance and later performed Candy Girl / I Want You Back, Bubbly, River, I’m a Believer, and Dancin’ with Myself. These dances were all choreographed by STA Director of Dance Ms. Maria Virginio. All dances performed by Choreography I and II, however, were choreographed by the students in those classes. Choreography I performed to Who You Are and Oogum Boogum, while Choreography II danced Him and I and Whatever It Takes. Both classes danced together in Don’t Kill My Vibe, Party Time, and Reflections.

The second part of the show was a concert showcasing the Aquinas Chamber Singers, STA Freshman Choir, and STA Chorale. This portion opened with The Seal Lullaby, performed by the Aquinas Chamber Singers. They also sang A Nightingale Sang in Berkley Square, The Pink Panther, and Musical Risotto, which proved to be a crowd favorite. The STA Freshman Choir took the stage next, singing The Pasture, Ave Verum Corpus, and Bonse Aba. Following that, the STA Chorale preformed Offertory, Ev’ry Time I Feel the Spirit, and Desh. To close the show, all of the groups joined together to sing the final benediction, which was The Lord Bless You and Keep You.

Raider Review reached out to the Director of Choral Activities Mrs. Wanda Drozdovitch, for her comments. Mrs. Drozdovitch said that “… the show went really well. Students were very well prepared for the Spring Concert and delivered a truly professional performance.” She noted that the show “… took a lot of preparation,” with rehearsals scheduled all the way back to January. She also added, “Events such as Concert District and State Music Performance Assessments (MPA) are key tools for successful preparation for the show.” Mrs. Drozdovitch explained that the STA Chorale was recently awarded the prestigious title, “… Choir of Distinction of the State of Florida” for the first time in STA history, and noted that, “…this recognition is the equivalent to winning States in sports.” 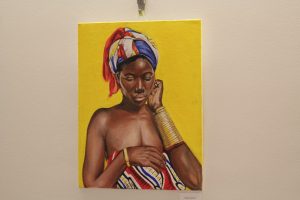 A variety of works from the digital and studio arts classes were featured in the Spring Art Show. This show, which was on display in the lobby of the Bienes Center, ran in tandem with the Spring Dance and Vocal Concert. Senior Valery Cardona, a studio arts student, entered an oil on canvas painting, titled African woman (pictured at the right). Another notable piece on display was Tree Girl, created by sophomore Kennedy White, a computer arts student (included in slideshow above). These works were only two examples of the many excellent pieces that were showcased during this event.

Once again the dance and vocal performances were a great success. All of the hard work that the dancers and singers put into the show definitely paid off. The beautiful works of art brought the Bienes Center lobby to life. STA can be very proud of these young Raiders who shared their talents with the community.