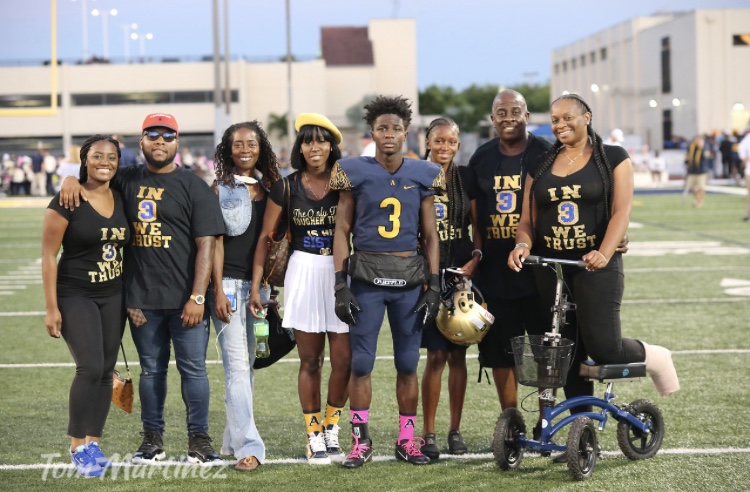 The class of 2019’s graduation is drawing nearer each day that passes. With the start of the second quarter, seniors are experiencing many ‘high school lasts,’ as well as privileges, that only seniors have the opportunity to enjoy. Senior Night is an occasion when sports teams’ underclassmen and coaches throw a celebration for graduating teammates.

One such example was when St. Thomas Aquinas High School’s (STA) younger marching band members decorated the band room with a space theme. They also made baskets, filled with candy, sentimental letters, and other goodies, for each of the senior members. The junior cheerleaders also went all out by making sashes for the seniors, getting them all bouquets of flowers, and giving each of them a basket filled with thoughtful gifts.

The October 26 Friday football game was the senior football players’, cheerleaders’, marching band members’, and sideline specialists’ turn to say their farewells on the football field. As this was the last home game of the regularly scheduled football season, it was the ideal time to acknowledge the seniors that have been involved with every game, both on the field and sidelines.

The evening started with the seniors’ parents meeting in STA’s cafeteria for a reception that included a meal and time to reminisce about the past three years. The seniors also wrote heartfelt messages for their parents on a whiteboard, that was on display for everyone to see. Afterwards, the parents were lined-up, alphabetically, and grouped by the categories in which their child participated. Then they were reunited with their children on the sidelines of the football field.

For students who had not yet come to realize it, this was the moment where they grasped the idea that their time at STA is coming to a close. Families mingled with others around them in line while waiting for their turn to walk across the field. First the football players were called with their families, then the sideline specialists, followed by the cheerleaders, and ending with the marching band members. Each family walked onto the field, stopped to have their picture taken by Tom Martinez from Thomas Studios USA. It was a heartfelt evening that ended with an outstanding 58-0 win for STA    against Blanche Ely High School.