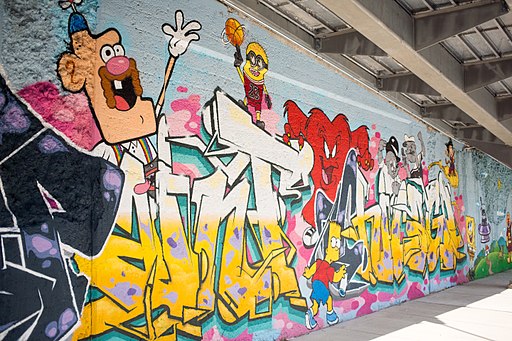 Some think of graffiti as a type of artistic expression, but others think of it as a crime.  So which is it?

Art is a thought or feeling that is transformed into a visual form. From this point of view, graffiti falls into the category of art. Popular locations like Wynwood, Miami, and Venice Beach, Los Angeles, have become galleries for graffiti. Specifically, devoted graffiti artists,  Tristan Eaton and The Goldmans, have gained recognition for their works on the walls of Wynwood. However, legality is a big factor for someone who enjoys making graffiti art. Artists require the permission of building owners and the approval of city authorities to create their works in public spaces.

Although graffiti can be considered art, the problem is that it uses private or public property as a canvas. When this happens, these actions are considered vandalism. According to Mark Theoharis, attorney and writer for Criminal Defense Lawyer, “Vandalism is the willful destruction or damaging of property in a manner that defaces, mars, or otherwise adds a physical blemish that diminishes the property’s value.” Furthermore, vandalism is a felony which could result in fines or prison time. Miami.gov recommends that “If you witness someone in the act of defacing property with graffiti, for your own personal safety, do not approach the graffiti vandal. Simply call the Miami-Dade Police.” This site specifies that you should call the non-emergency number, but some areas encourage you to call 911.

Negative emotions can be an impetus for graffiti related vandalism. . According to Benjamin F.Walker, reporter for Clean Link, vandalism is usually done by juveniles. In the same article he quotes Dr. Jeffery Chase, a licensed clinical psychologist, who says that “Vandalism to me is basically anger,” Dr. Chase goes on to say that this type of vandalism is misplaced anger that is released on inanimate objects, rather than living beings. According to an article on the CrimePrevention.com site, one reason why most people do not approve of type of expression, is because their taxes are spent on repairing the damage done by graffiti. The removal can cost up to millions of tax dollars.

People responsible for graffiti have a huge risk of negatively affecting not only themselves but the environment. Spray paints containing aerosol can cause many health issues. People who are exposed to these chemicals are at high risk of inhaling toxic fumes. According to pediatrician Dr. Alan Greene, creator of Dr. Greene.com, breathing in excessive amounts of aerosol paint can cause: “…memory loss, hearing loss, impaired concentration…,” as well as “…permanent heart, lung, liver, and kidney damage…”

In the end, although it may be eye-catching, unauthorized graffiti is a crime that carries serious consequences. For that reason, motivated graffiti artists should familiarize themselves with the laws in their areas.