St. Thomas Aquinas High School (STA) Raiders seem to be drawn to exploring different environments and new cultures. If there was ever any question about whether a flight that exceeds 17 hours is worth the time to visit a new continent, the answer is YES! This long flight can take you to Asia, an exotic, alluring continent that’s inviting to anyone looking for an adventure.

If you love the craziness of big cities, East Asia is a great place to visit. Beijing, China, as well as Tokyo and Kyoto, Japan are fast-paced cities that offer major attractions in this part of the world. Visiting both of these countries is a unique mashup of old and new cultures, with futuristic skyscrapers around the corner from ancient historical sights. STA freshman Benjamin Rabinowitz said that this is the aspect of China that he loved the most. He described how being able to walk along the Great Wall of China, was an experience he will never forget. He also recommended just roaming through the streets of Tokyo and explained that “you get the same sort of city rush that you would feel walking through Time Square in New York City.” 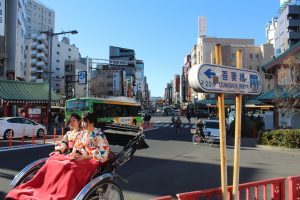 STA sophomore Matthew Ishibashi Heron’s favorite place to explore in Japan was the Tokyo Tower. Matthew mentioned that “the tower is really tall and a landmark in Japan that is known throughout the world as one of the tallest buildings.” The Tokyo Tower is the second-tallest structure in Japan measuring 1,092 feet high and weighs 4,000 metric tons. It is a breathtaking site that leaves tourists awestruck.

STA sophomore Gayatrisai (Sai) BabuSuganya traveled to India during the past summer. She shared that her favorite experience from the trip was exploring ancient temples, like the Sri Lakshmi Narasimha Swamy Temple. She described this holy shrine as being “very artistic and colorful.” India is well-known, throughout the world, for the jaw-dropping beauty and unique architecture of its ancient temples. The journey to these structures is just as beautiful as the temple itself. While driving through the towering mountains with her family, Sai felt as if she was in the clouds. Along the roadside, she saw many astounding waterfalls and wild animals like tigers, elephants, and monkeys. When she arrived at the temple, vendors were selling mangos. Sai recounted that wild monkeys roaming the temple would steal the mangos, making the visitors laugh.

Sai took the long journey to India to be reunited with, and introduced to, members of her extended family. While visiting this exotic country, she noticed how conservative the culture is, particularly the women’s traditional clothing. Even in such a humid climate the women are still expected to be covered from head-to-toe, as part of their religious beliefs.

Asia is a desirable vacation spot for adrenaline seekers and history lovers. Raiders that recently traveled there loved their experiences, from visiting historical sites to learning about new and diverse cultures. Asia leaves a lasting impact on its visitors and leaves tourists wanting to go back, to see as much of the continent as possible.