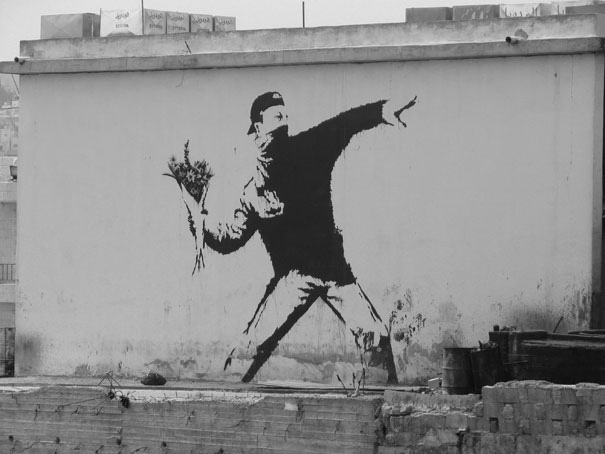 Banksy is an anonymous street artist who has revolutionized this type of art. Will Ellsworth-Jones from the SMITHSONIAN MAGAZINE describes Banksy as a “…graffiti master, painter, activist, filmmaker and

all-purpose provocateur…” which is a very accurate portrayal of him. Banksy’s artwork interprets his political views in unexpected ways.

Banksy can find humor in many serious situations, and his works compels the viewer to think about what he is trying to communicate. His captivating, provocative and audacious works speak to many different people all over the world. Yes, Banksy may not be for everyone, but he always evokes a reaction from the people who do follow his work.

Banksy has done some very daring things throughout his art career. During a London auction in October, 2018, Banksy’s painting worth 1.4 million dollars self-destructed as it was being auctioned off. A Banskyfilm YouTube video, reveals how he made his painting self destruct. He embedded a shredder into the frame and during the auction, used a remote control to activate the device.

Preminda Jacob, of CNN, reported that, “In shredding ‘Girl With Balloon,’ Banksy seems to be pointing to a central absurdity of his graffiti art being treated as fine art.”

This amazing mysterious artist can change a whole environment with the button on his spraycan. Banksy chooses to paint on buildings all over the world. The art community uses the expression bombed, when Banksy applies his artwork to these structures. Will Ellsworth-Jones noted that “…[Banksy] has bombed cities from Vienna to San Francisco, Barcelona to Paris and Detroit.” In an article by Isaac Kaplan of artsy.net, he explains that there is a huge financial downside to creating public art, because “…Banksy’s illicit public art in the United States by and large belongs to whoever owns the bricks

on which it appears.” This means that, currently, the owners of the buildings can profit because his works increase the value of their properties. Hopefully this will not continue to happen in the future.

Banksy is a very unique talent. Being an undercover artist brings mystery and curiosity to the table. He often hides his identity behind a paper bag and yes, although some people do want to unmask him, reporter Will Ellsworth-Jones says that “Most of his fans don’t really want to know who he is … But they do want to follow his upward trajectory from the outlaw spraying … walls in Bristol, England, during the 1990s.”