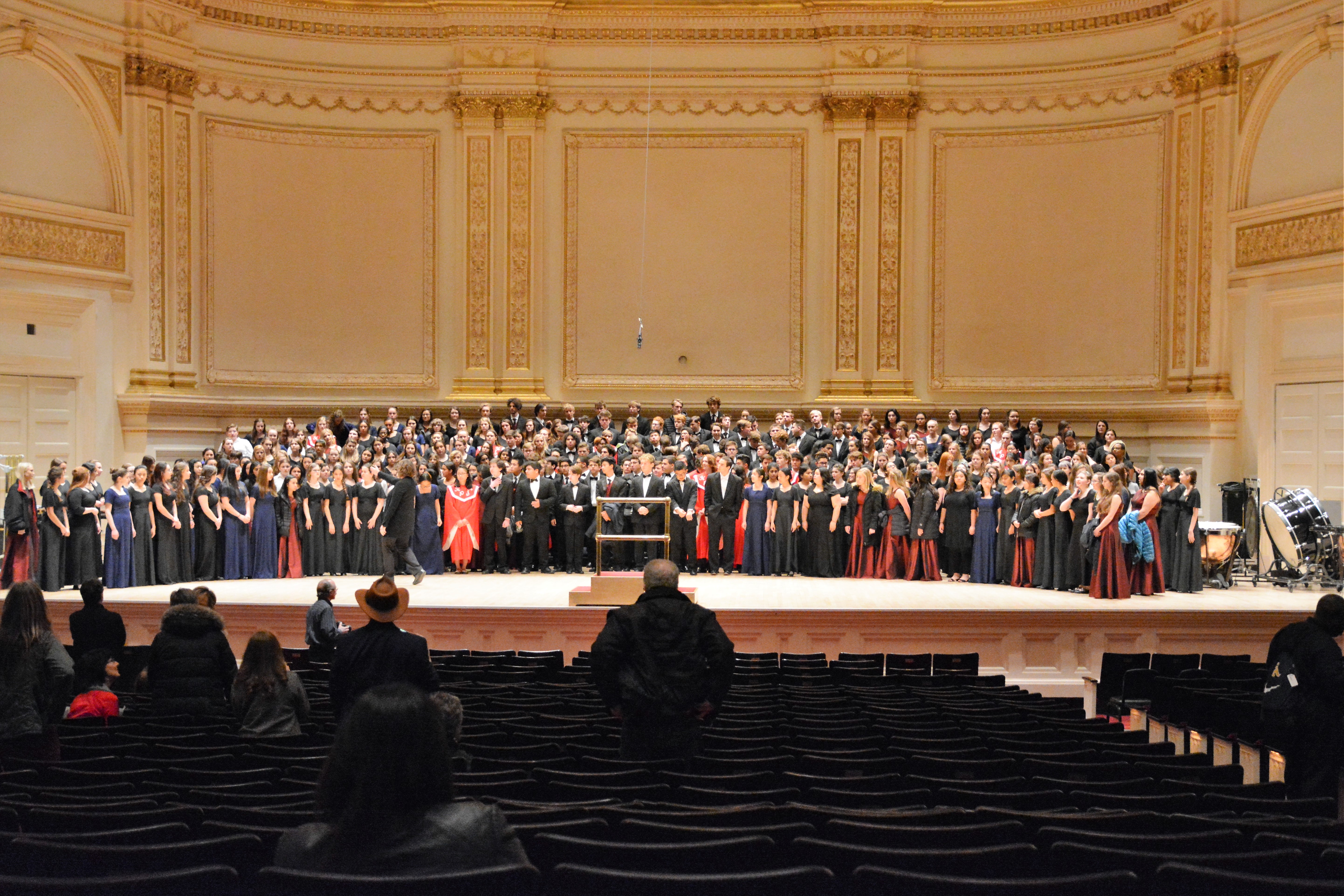 St. Thomas Aquinas High School’s (STA) Chorale sang their way to Carnegie Hall in New York City. STA has participated in the Carnegie performance, which is one of the highest honors for chorale members, three times during the last six years. The four-day trip provided new experiences and memories for all of the high school singers; from performing to sightseeing.

The eighty-four STA students started their New York City journey on February 22, 2019. The trip was hectic, starting with a wake up call at 3:00 A.M. to get to the airport by 4:00 A.M. After the three-hour flight, students were given time to eat and quickly visit The Met. Later, all of the chorales from around North America met to practice the selected songs with Carnegie’s Choral Director, Grammy Award winner, Jeffrey Redding. STA sophomore Hailey Kelderhouse told Raider Review that, “[Redding] was absolutely amazing, he wasn’t just a great instructor but he was a really good teacher … about life.”

After the practice, STA Chorale and chaperones made their way to Broadway where they saw Wicked. Following breakfast on Saturday, all the chorales spent a total of six hours practicing. During that time Mr. Redding sharpened the students’ skills and knowledge of the songs. When rehearsals ended, the STA chorale and chaperones rushed out to see the breathtaking St. Patrick’s Cathedral, then headed out to explore the bustling Times Square. Sunday was the day everyone was anticipating; the Carnegie performance. The STA choir members that Raider Review interviewed said that performing on Carnegie Hall’s stage was an experience they’ll never forget. Sharing the spotlight with hundreds of students from different choirs, that represented so many different places was a thrilling experience. The concert ended with a standing ovation. The enthusiasm from the audience rewarded the countless hours of practice that the students put in. Mr. Redding would say it is the performer’s purpose to, “inspire, not impress.” The choirs’ goal was to move the audience with every song through their emotions and skills not to just put on a show.

Performing at Carnegie Hall is just one of the accomplishments that the STA choir has experienced. Multiple members of the Chorale won awards at the All-State competition which is the most challenging test for solo singers. The Chorale has also participated in Epcot’s International Festival of the Holidays: Candlelight and in Pueri Cantores; which brings youth choirs together to sing the Peace of God. Last year STA won Superior Choir of Distinction, which is the highest achievement a high school Choral can receive.

STA’s Choral would not have been able to accomplish, participate in, or excel at the current level of performance without Choral Director Mrs. Drozdovitch. She directs and teaches her students to ensure that every performance will be perfectly executed. Sophomore Madison Mendez said ”With the help of our Choir Director Mrs. Drozdovitch, she would test us on every song, every week, and go through every song thoroughly so we could understand what we were singing and we could deliver the song the best we possibly could.”

STA’s time in New York City was an all around blast. With the non-stop movement and constant flow of new experiences, the four days passed in a blink of an eye. Everyone enjoyed their time with friends and the experience of performing at Carnegie Hall.