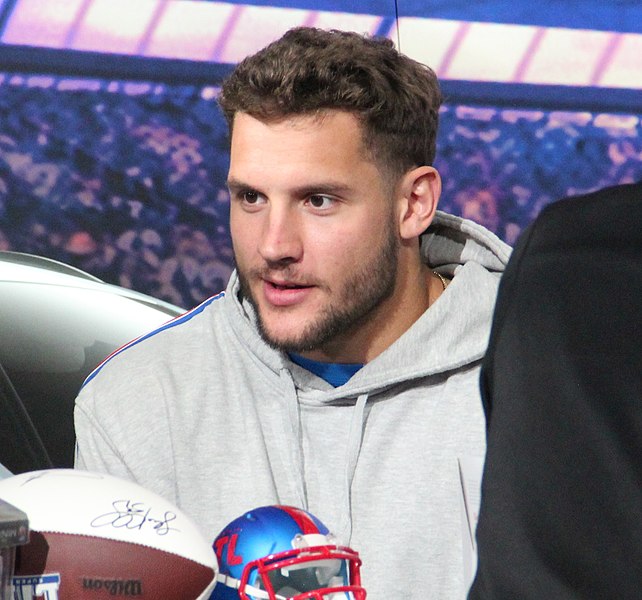 By Matthew Emmanuel, Zatoria Thompson and Madison Schlichte
MAY 23, 2019

In his high school career, Nick Bosa was considered a strong defensive presence. His scouting report, posted on 247sports.com, says, “It is really hard to find anything wrong with this elite defensive lineman. He brings it each and every play for four quarters and others see that and feed off that.” According to 247 Sports, Nick Bosa was ranked the eighth best football player in the nation for his 2016 senior class and was also named the best high school defensive end in the nation. Bosa started his college career at Ohio State, and he played in all 13 games in the 2016-2017 season. He showed promise as a freshman, recording 29 tackles along with 5 sacks. In his sophomore season, he was named the starting defensive end. Bosa finished his sophomore season strong, posting a team-high seven sacks while also earning First Team All-Big Ten honors. Before Bosa even began his junior year, he was projected to be the first pick in his draft class. However, things came to a halt when Bosa sustained a season-ending core injury. After he underwent surgery, Bosa announced that he would be foregoing his senior season to prepare himself for the 2019 NFL Draft.

After a strong performance at the NFL Combine, many analysts speculated that Bosa would be the first defensive player selected in the draft. On April 26, 2019, Nick Bosa was selected second overall by the San Francisco 49ers. This was a big moment for both parties, as Bosa found his NFL home and the 49ers acquired the defensive end they long coveted.

The selection of Nick Bosa made him the 37th player from St.Thomas Aquinas to be on an NFL roster. STA currently holds the record for the most NFL players produced by a high school. The STA community will see how Bosa translates his college football career to the NFL when he plays his first professional game on September 8th, 2019.