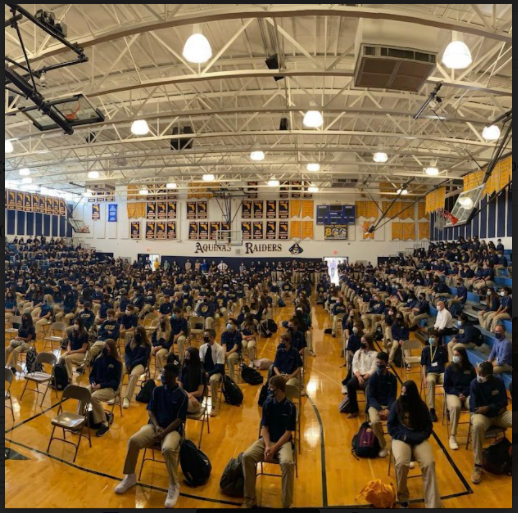 The previously empty hallways of St. Thomas Aquinas were transformed by a chaotic crowd of new students, desperately trying to find where their next class would be on August 18, 2021. Although figuring out the location of their classes was hard at first, the freshmen have mostly adjusted to their schedules. However, some aren’t adjusting the way they wish they were. Even though some freshmen still haven’t adapted, the upperclassmen and staff have been as helpful as they can be by answering questions and helping students learn the ropes of being in a new environment as big as this one.

This school year has been a big transition for the staff, faculty, and upperclassmen; as well as the incoming freshman. Even though the freshmen have had to get used to a completely different setting, the faculty and staff have had to readjust to in-person teaching. In the same way, the upperclassmen have also had to readjust to in-person learning.

According to the survey responses, the majority of the students who took it liked the high school environment more than a middle school setting. Although some students are still struggling, it seems that the majority is adjusting well. The survey also showed that the majority have an interest in school offered clubs and activities.

In spite of the difficulties faced by a small portion of the students, the majority are looking forward to a year full of exciting opportunities, both academic and extracurricular.