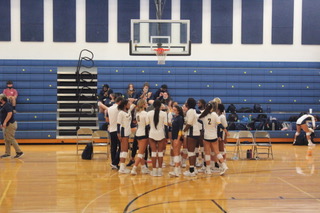 On Friday, September 10, St. Thomas Aquinas High School went head-to-head with Nova High School in two volleyball matches. Nova High is a public school located in Davie, Florida, according to Niche. Not to be confused with University School, Nova’s mascot is the Titan.

At around 4:30 P.M, the junior-varsity match began at St. Thomas. In an email interview with Coach Zielenski, she highlighted Natalie Valdes and Kayla Troutman as notable players.

The score of the first set was 25 to 5, with the Raiders far in the lead. The Raiders then won the second set 25 to 7. Junior varsity games only go to three sets, so another set wasn’t needed; the Raiders had won.

After the junior varsity team’s victory, it was the varsity team’s turn to make STA proud. Nova’s players took to the court first to warm up. The Wii Theme Music played throughout the gym as the team ran through drills. Once their time was up, the Raiders warmed up by serving while playing loud rap music. Once both teams were prepared, the varsity game began.

The Raiders were in the lead from the start. Setter Liah Perez enabled her teammates to score on the opposite team by performing 25 assists throughout the game. Zori Brown, number 16, scored nine kills throughout the match. Zoe Taylor, number 10, scored seven kills. Zy’aire Barr scored an astounding 12 kills. The first set ended with the score of 25 to 8, with the Raiders taking the first win. The second set began, and the winning spirit of STA continued. One hitter that stood out was Mikayla Porter, number 15, who scored ten kills throughout the match. The second set ended with a score of 25 to 15, with the Raiders taking another win. The bond between the teammates was obvious; after each point scored, they congratulated each other in a group huddle. The outcome of the match was reliant on the final few moments . If the Raiders were victorious in the next set, then they would win the game.

The STA players rallied together to secure a victory for the Raiders. Another setter, Malia Brooks, performed 14 assists throughout the entire match. Libero Alyssa McBean dug 9 balls and received 12 serves over the course of the game. The score reached 24-11, with the Raiders in the lead. The players and fans were on edge, knowing that one more point needed to be scored so that the STA players could bring home a victory. In the final play, whenever the ball was contacted, the crowd chanted, “S…T…A!” Zori Brown scored the final point, a perfect kill that Nova couldn’t receive. The Raiders were victorious.