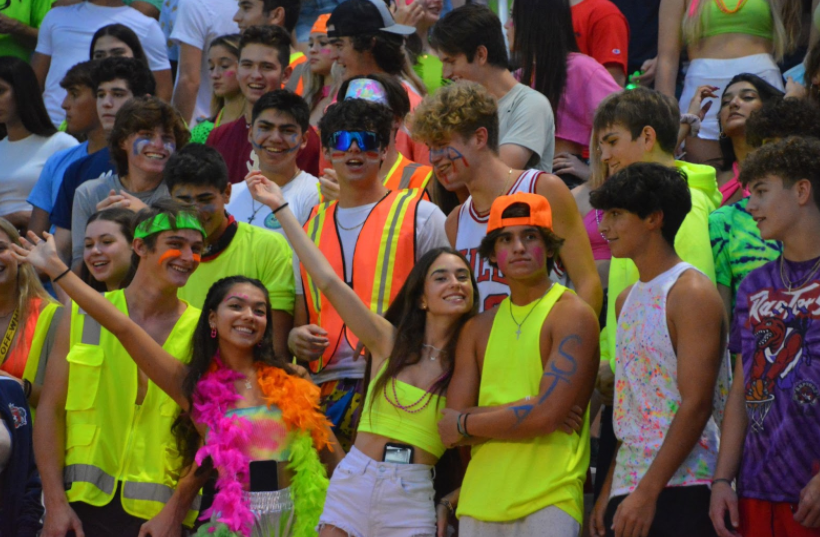 The Rowdy Raiders have been taking over STA sporting events. They have been showing up at games in different themed regalia; supporting their classmates and intimidating the opponents. The Raider Review got the chance to talk to the president and students involved with Rowdy Raiders, as well as some of our student-athletes to hear what their take on the club is.

“Rowdy Raiders is a group that attends different sporting events. We go and show our support to our classmates and to disrupt our opponents,” says Rowdy Raiders president Rocco Marando.  Rowdy Raiders strive to get into our opponents’ heads to help the STA Raiders to a victory. The STA students gather together for their classmates to cheer them on, and get rowdy!

During the games, the Rowdy Raiders have different themes for the sporting events. Major themes that have been introduced so far include: a white out, a USA theme, a blue out, and a neon theme. The Rowdy Raiders will dress up according to the theme so that everyone will be matching to show that this is Raiders territory. The students scream and yell to cheer on their classmates. Everyone gets hyped and excited to show their school spirit and catch the attention of our opponents. Talking to some of the students involved in Rowdy Raiders, many said that they get so hyped because they know the louder they are the more they get into the opponents’ heads. The students also love being able to dress-up according to the theme and have a fun night cheering on the STA athletes.

“I joined Rowdy Raiders because I love how the club allows students and fans to unite and cheer for their friends on any of the school’s sports teams. I feel that showing school spirit has helped us all become closer, and it has brought a really positive energy to our school” says senior Catalina Mendez. She feels that we have become more united as a school and we have more school spirit due to Rowdy Raiders.

STA senior Katie Christianson also said some great things about Rowdy Raiders. “I wanted to join Rowdy Raiders because I love participating in school activities and have a lot of school spirit. I feel very proud to support the student athletes and classmates of STA because I know I’m making a difference in their game. They love to hear us cheer and they think  it helps them perform better.” She feels that the STA student athletes can perform better knowing that they have their classmates and friends there cheering them on. Student athletes seem to have the same feelings about Rowdy Raiders. They love knowing they have support from their school and classmates, and they feel motivated to perform to their best ability. The STA student athletes love having the Rowdy Raiders there to cheer them on knowing that they are there to help bring on an STA win.