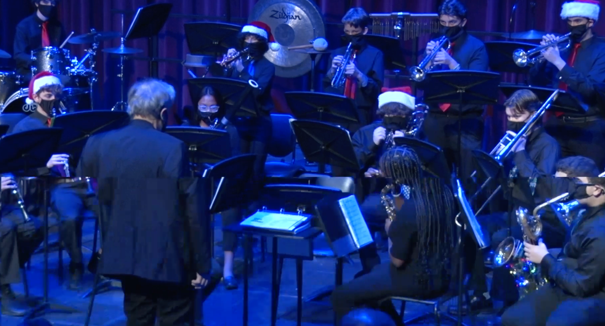 St. Thomas is decking the halls with musical Christmas cheer. The Holiday Concert began on December 7 and spanned three days. On the first day, both virtual and in-person viewers were treated to performances from the Guitar Ensemble, the Jazz Band, and the Concert Band. Their tunes could cause even the Grinch’s heart to grow! As Buddy the Elf once wisely said, “the best way to spread Christmas cheer is singing loud for all to hear.” Isabella Troccoli did just that by performing Let It Snow. Next was Comfort and Joy, which consisted of a stellar clarinet solo. The Jazz Band ended their section of the concert with Sleigh Ride, which stood out due to its remarkable, rich sound that flooded the Bienes Center.

The Concert Band had the difficult task of following the impressive Jazz Band, but they continued to dazzle all listeners. They started with It’s the Most Wonderful Time of the Year, then transitioned into the First Noel, which began with a saxophone solo. They finished with Holiday Grand Finale, putting an end to a wonderful start of the Holiday Concerts.