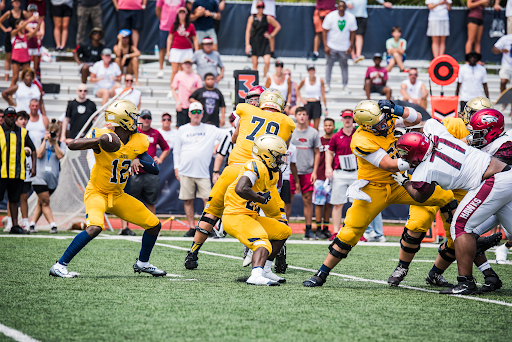 St. Thomas Aquinas faced off against St. Joseph Prep at home on Saturday, August 27th. Before the game, the Raider Review  interviewed King Mack, a 4-star safety who committed to Penn State University. He explained, “I feel great about the upcoming game. We’ve been preparing the whole summer for it with a lot of hard work.” When asked about what to  expect from him this season he said “Expect to see a play maker, a team player, and a leader.”Broden Sobolewski shared similar enthusiasm, “I feel really good.  Our team has been working really hard. I feel really great and we put a lot of things together over the off season and I feel great things are going to happen tomorrow.”

On the first possession the St.Thomas Aquinas defense stopped St. Joseph Prep. The St.Thomas offense came out and drove down the field with Jordan Lyles finishing the drive, bouncing off a defender and scoring the first touchdown of the day, and the season. St. Joseph’s offense came back out, drove down the field and ended the drive with a touchdown. The Raiders didn’t stop there; feeding their Tight End (TE), Tekai Kirby, as he had 74 receiving yards in that one drive alone. Tekai ran a seam route right down the middle of the field, popping wide open as the Quarterback (QB), Champ Harris, threw the ball right over the defense’s head for a 59 yard touchdown. This gave STA the lead of 14 to 7. The Aquinas defense stopped St.Joseph once again, the offense then capitalized on it with a big throw by QB, Champ Harris, to Wide Receiver (WR) ,Chance Robinson, putting them in the red zone. Then, Running Back (RB), Gemari Sands, scored a touchdown slipping past 3 defenders, and ending the quarter with STA up with the score 21-7. Both teams got stopped on their first possession of the second quarter. Then, St. Joseph drove down the field and scored again. STA started to get cold, throwing an interception that led to a field goal for St. Joseph to end the quarter, going into half-time 21-17. The

Raiders came back out after half time with 2 big runs by Jordan Lyles; one led to a 65 yard touchdown run. STA started losing momentum again, with 2 fumbles on back to back possessions, which led to St. Joseph taking the lead of 31-28. As the quarter was coming to an end, the Raiders drove down the field, 4-star WR, James Madison, ending the possession with a screen pass leading to a touchdown. At the start of the fourth quarter the defense stopped St. Joseph, once again giving the offense the ball to finish the game. The offense went down the field with a different mentality, punching the ball in the endzone. St. Joseph scored again and the offense got stopped on the fourth down, giving St. Joseph the ball with 37 seconds left in the game. On the final play of the game, St. Joseph fumbled and the ball was recovered and returned for a touchdown by Nick Rodriguez. The final score of the game was 48-37 with The Raiders taking the win!

Champ Harris, the starting QB for STA, ended with a total of  220 yards with a 79% completion rate. His QB rate is 133.8 and he passed for an average of 14.5 yards. St. Thomas Aquinas running back Jordan Lyles rushed for 138 yards with an average of 15.5 yards. He had help from Broden Sobolewsoki (OL, Army Commit) who said before the game, “I’m going to dominate every play and I would be worried if I were the defense, I’m a monster out there and they’re just not ready for me.” He had ten carries and scored 2 touchdowns for STA. Gemari Sands had 80 receiving yards in this game with an impressive 20 yard average. He also had one receiving touchdown  and one running touchdown.